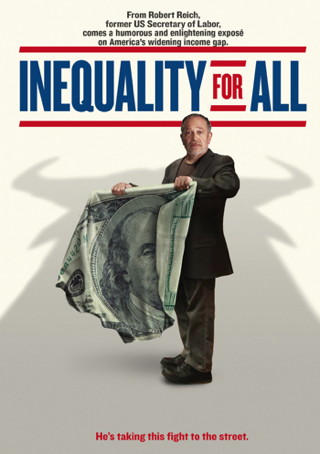 Former Secretary of Labor and unabashed liberal Robert Reich speaks to the decline of the American middle class in Inequality for All, a cogent documentary by filmmaker Jacob Kornbluth.

A former Rhodes scholar, Reich uses the film to challenge conservative economists and their trickle down theories, arguing against the concentration of wealth at the top and refuting those who tout the sanctity of the “free market” and the prime importance of wealthy “job creators” in fueling our economic growth.

Bookended by scenes of Reich making his case to students at Berkeley, where he is Chancellor’s Professor of Public Policy at the Goldman School of Public Policy, the movie is a serendipitous mix of charts, interviews, biographical information about Reich – including flashbacks of him and Bill Clinton in their youth – and head shots of this gentle impassioned individual talking about the importance of economic justice.

Employing hard numbers, Reich argues that it is consumers and their spending who propel our capitalist system forward, and that neither the economy nor our democracy will recover from their ills until purchasing power is returned to the middle class.  To illustrate, he interviews enlightened entrepreneur Nick Hanauer, who inherited a family business that manufactures pillows. Hanauer makes an obvious point: that wealthy people at the top can use just so many pillows – and therefore it’s necessary to have money in the hands of a large number of consumers in order for businesses like his to prosper. Unfortunately, middle class purchasing power has been shrinking since the 1970s, as American unions and working people in general have lost clout, and as technology has commandeered more and more of the tasks that were once carried out by flesh and blood human beings. The inequality gap is becoming more and more egregious, with the four hundred richest Americans now wealthier than the bottom 50% of the population. Reich theorizes that if the current trends continue, the top 1 percent will probably be receiving more than a quarter of our total national income a decade from now.

Reasonably well-informed viewers won’t find a lot that’s new or revelatory or explosive in what Reich has to say, since the information he presents is more a compendium of what, in progressive circles, people already understand, rather than a revelation of what they do not. And there are plenty of other folks who may not be interested in reading about politics or economic theory but have been the victims of downsizing or outsourcing and understand from personal experience what Reich is talking about. For these people too, the film’s message may come as no surprise.

But what Inequality for All lacks in drama it makes up for with common sense, intelligence and heart.  There are far too few voices like Reich’s out there in our public forum. We ignore them at our peril.

Inequality for All released on DVD and BLU-RAY™ January 7, 2014.