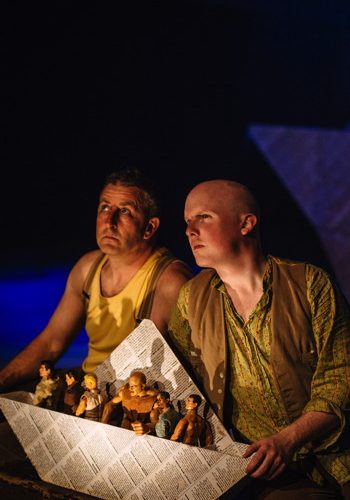 An exciting and fun show for children (perhaps best for ages 6-10) is now playing at the Wallis Annenberg Center for the Performing Arts, in their intimate 150-seat Lovelace Studio Theater. Jason and the Argonauts, based on the classic Greek myth, is performed by two actors (amusingly aided by a fistful of GI Joe-type action figures) from the Visible Fictions children’s theater of Scotland. The 70-minute show runs through February 2, 2014.

The kids in the audience were truly engaged by this dramatic tale of Jason’s quest for the golden fleece—above all, they were enchanted by the duo’s clever presentation of the story, which included some funny banter and squabbling before the pair of performers settles in to relate the tale. We first see Jason as interpreted by one of the actors, Tim Settle, and later Neil Thomas seamlessly slips into the role. Later they adopt the roles of the ‘Argonauts’ – the heroic men that Jason selects for his boat journey to the end of the earth. In fact, both actors take on many roles, amply demonstrating their acting prowess as well as their approachability. Other times, the fellows hold up dolls and speak lines, much like a kid playing with puppets or dolls would playact. It’s really fun stuff!

The set is quite ingenious—sometimes a folded piece of newspaper represents Jason’s ship the Argo, but later the large wooden trundle onstage folds out to resemble an oversized paper boat.

Jason and the Argonauts from Visible Fictions

Thursday and Fridays at 7pm;

Saturdays at 3pm and 7pm;

ABOUT THE WALLIS:
Located in the heart of Beverly Hills, the Wallis Annenberg Center for the Performing Arts (The Wallis) transforms a Beverly Hills city block, facing Santa Monica Boulevard, between Crescent and Canon Drives, into a vibrant new cultural destination with two distinct, elegant buildings: the historic 1933 Italianate-style Beverly Hills Post Office (now the Paula Kent Meehan Historic Building) and the new, contemporary 500-seat, state-of-the-art Goldsmith Theater.  Together these two structures embrace the city’s history and future, creating a new cultural landmark. Within the treasured Post Office, existing spaces are re-imagined into the 150-seat Lovelace Studio Theater, a theater school for young people, a café and gift shop. The Wallis, the first performing arts center to be built in Beverly Hills, will be a home for artists from around the world and audiences of every age.  For its Inaugural Season, The Wallis will produce and present outstanding theater, music and dance, as well as exciting programming for the family audience. The venue will also enhance the live theater experience through special exhibitions that will reveal another layer of meaning to a show or presentation.