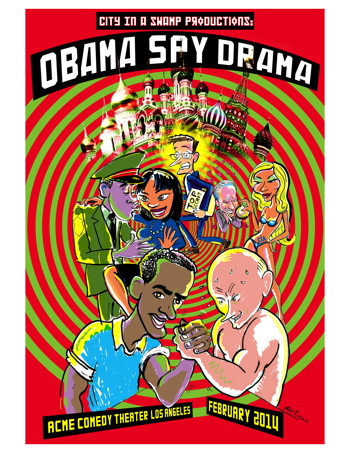 for its World Premiere

With the Winter Olympics upon us, and recent attempts to reign in NSA spying, the time is ripe for musical comedy with a Russian accent. And that’s what “Obama Spy Drama,” the new show from City in a Swamp Productions, provides in abundance. Along with musical parodies, the satire playing at Acme Comedy Theatre is filled with spy agency intrigue, romantic complications and a display of international muscle.

More than anything, President Obama wants NSA leaker Edward Snowden brought back to the U.S. “Obama Spy Drama” reveals just how he accomplishes that. To help the President, the CIA deploys a powerful new weapon, a pheromone spray guaranteed to make the victim “follow you anywhere.” In the hands of luscious temptress Dania Suarez (an old “friend” from the Secret Service’s Colombian adventures), the elixir will do its trick. But when it overpowers the wrong person, things get complicated.

Even though President Obama has chosen not to attend the Sochi Winter Olympics, he will have to go to Russia after all and face Vladimir Putin in a competition of Olympic proportions. But wait—isn’t that President Obama romancing Michelle back in the White House? How can that be, if he’s in Russia? And has Putin fallen in love with Edward Snowden?

*   *   *
City in a Swamp Productions is based in Washington, DC and specializes in political satire and musical comedy. Obama Spy Drama is the company’s fourth show in the LA area. Its first LA show, Rock ’n’ Ridicule, ran at Acme in 2010. Shows in 2011 (Oh, Momma! And Obama) and 2012 (How Obama Got His Groove Back) ran at the Fremont Centre Theatre in South Pasadena.

Information on past productions can be found on their official site.

The President has been watching you.

Now it’s your turn to watch him.

Sit back and get ready to laugh!