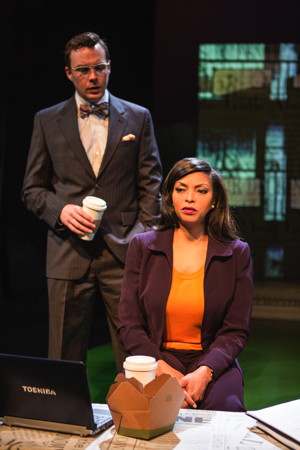 A toothless drama, Bernard Weinraub’s Above the Fold takes an inflammatory crime ‘ripped-from-the-headlines’ (based on the 2006 Duke University Lacrosse team rape case) and fails to convert it into compelling theater. Ambitious newspaper reporter Jane (Taraji  P. Henson) flies from New York to a Southern university where three white fraternity boys have been accused of raping a young African-American woman. Ostensibly there to interview the DA Lorne (Mark Hildreth) who is running for a seat in Congress, instead Jane pursues this hot, breaking story and runs with it. But soon Jane finds herself questioning the narrative that she, the DA and her paper has created, and also finds herself facing a difficult choice regarding a sought-after promotion.

The elasticity of journalistic integrity, the common duplicity of politicians and the instances of dubious rape claims all get thrown into the mix, minus any rigorous examination. The story unfolds with dull predictability and the stakes are never high enough to care which way it turns, even though we already know where it is headed.

Hildreth brings a great ‘Jimmy Stewart-decent upstanding guy’ quality to his role as the DA out for justice, never hiding his righteous bias against the “privileged white boys” accused of the rape and vicious assault. Henson is good as the ambitious, sometimes feisty but mostly world-weary journalist, although I wish the role had been better crafted for her prodigious talents. (Henson is an Oscar and Emmy nominated actress.) Kristy Johnson is also good as the flaky, occasionally unsympathetic crime victim Monique who gravitates to the spotlight.

As one character laments late in the play, “…the narrative is a little murky.”  It sure is.