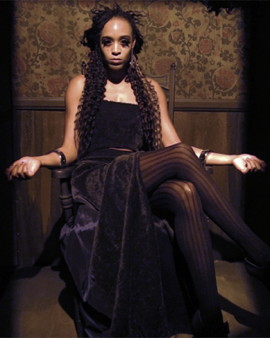 Throughout the briskly paced and entrancing 80-minute evening, six of H.P. Lovecraft’s most well-known stories are narrated and performed, sometimes staged with puppets or employing shadow play to excellent effect.

Lovecraft: Nightmare Suite, featuring six strange tales of monsters, mayhem, and cosmic horrors brought to life. All text is taken directly from the short fiction, essays, and poetry of Lovecraft.

Considered the godfather of modern horror, Howard Phillips “H. P.” Lovecraft (August 20, 1890 – March 15, 1937) was an American author who achieved posthumous fame through his influential works of horror fiction. Virtually unknown and only published in pulp magazines before he died in poverty, he is now regarded as one of the most significant 20th-century authors in his genre.

As the show is based on a collection of the author’s assorted writings, the success of this evening depends on the performances being first rate in order to execute the show without being too stagey or ‘literary’. Conceived and directed by Dan Spurgeon, here he has assembled a troupe of high caliber actors who expertly relate the macabre stories with just the right amount of (occasional flashes of) humor to offset the mostly chilling tone of ineffable horror.

For The Outsider, Anna Safar plumbs emotional depths to relate a bizarre tale of a social misfit.

The entire cast gives excellent performances throughout—this is a highly entertaining evening that is worth seeing.

Tickets are $23.00 for all performances

Parental guidance is recommended for young children.
Due to the nature of the performance, late seating is at the discretion of management and cannot be guaranteed.

Lovecraft: Nightmare Suite features performances of six classic Lovecraft stories:
— The Statement of Randolph Carter. An archaeologist unearths an unspeakable horror while exploring a crypt.
— The Cats of Ulthar. In an ancient land, a young boy’s prayers are answered after his beloved kitten goes missing.
— The Outsider. A lonely individual decides to break free of a dark forest in search of human contact.
— The Picture in the House. A young man seeking shelter from a storm discovers a book with disturbing engravings.
— Cool Air. A rooming house boarder meets a reclusive doctor obsessed with cheating death.
— Nyarlathotep. One of the Outer Gods manifests and unleashes horrific visions on humanity.
Excerpts of the author’s poetry and prose are used to introduce and bridge the stories.

The Visceral Company, called “LA’s premiere horror theatre troupe” by Fangoria magazine, specializes in works that explore the dark, strange, and macabre – killer shows from darker places. We hope to encourage further onstage exploration of the horror, thriller, and science fiction genres, which have been underrepresented in theatre, and to build an appreciation of theatre in the younger audiences that are traditionally drawn to them.