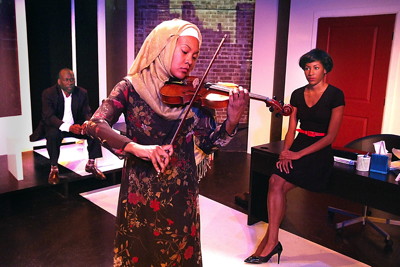 Sporting a message of sisterhood and tolerance, Wendy Graf’s well-intentioned but clumsy drama builds around two half-sisters: Julia (Diarra Kilpatrick), an ambitious attorney living and working in Manhattan, and Neyla (Yvonne Huff), her newly discovered sibling, whom Julia’s father had sired when he was a soldier in Iraq.

The play opens with Julia rolling around in bed with Ron (Ted Mattison), a senior corporate lawyer at her firm who, following coitus, imparts the giddy news that she will soon get to work on a big case. It’s a real coup for Julia, a woman whose overriding passion is professional advancement. So when her Dad (Brent Jennings) shows up and informs her that she has an Iraqi sister who shortly will be arriving in the U.S. – and could she please make her immediately welcome in her small studio apartment – Julia isn’t curious; she’s indignant. She denounces her father for his infidelity and for various other slights to her mother and herself. She also decries this “sister” as a probable fraud, with mercenary motives or worse.

When Neyla arrives, she turns out to be soft-spoken and gracious – in contrast to the strident sardonic Julia – albeit with undisclosed motives that are hinted at later in her surreptitious meetings with a mysterious man (Adam Meir). Reluctantly, Julia permits her to stay “for the night,” – a sojourn that extends, much to Julia’s chagrin. Busy with her work, she leaves Neyla alone in the apartment all day, insisting that she remain there, least she get lost wandering the streets of Manhattan by herself. But Neyla, who speaks seven or so languages and plays the violin, is no cloistered pushover; she does go out, conveniently affording Julia the opportunity to rifle through her things and uncover her “secret.”

From the beginning the playwright’s blueprint is clear: Establish polarity between the two women  – who represent their respective cultures – then engineer a plot in which they clash, and a denouement in which they reconcile their differences and arrive at enlightenment and understanding. Fine: Who can argue with striking a blow against bigotry and promoting mutual tolerance?

The problem is that Graf constructs the drama with such stark lack of nuance that you can’t help feeling patronized. In one scene both Julia and her Dad show themselves to be so ignorant of Islam that they prepare a toast to their family’s reunification, then express surprise when Neyla tells them that drinking alcohol is against her religion. In other scenes the foxy Julia repeatedly suggests that the modestly garbed Neyla – long skirt, long sleeves and a head scarf – change into one of her own skimpy dresses – apparently oblivious to the strictures of a Moslem woman’s dress (or at the very least, disrespectful of it). Though it begs credulity that an educated person like Julia would be unaware of these most basic aspects of Islam, Graf incorporates these scenes into the story, the better to underscore the differences between Middle East and West, as if these things were not already common knowledge (at least among L.A. theatergoers). And when Julia’s lover implores her to take their relationship beyond the casual and meet his family, her condescending brush-off registers as more of the same. The character comes off as some soulless archetype of a “liberated” modern American woman, rather than an honest-to goodness person, likable or otherwise.

Unfortunately, Shirley Jo Finney’s direction adds little texture to this simplistic setup. Kilpatrick, a performer who’s displayed considerable depth in other roles, relies on a one-dimensional subset of polished mannerisms and responses to define her performance. Jennings’ rumpled fatherly manner isn’t enough to convince us that he’s her Dad; in fact, the actor appears not quite sure of it himself.

But Huff, recruited at the last minute after the performer originally cast had to bow out – proves the production’s saving grace, exuding a warmth and intelligence that have you caring about Neyla and in her corner all the way. Set and projection designer Hana Sooyeon Kim makes excellent use of the small space, and Naila Aladdin Sanders’ costumes – Julia’s are smart and chic – are a visual plus.