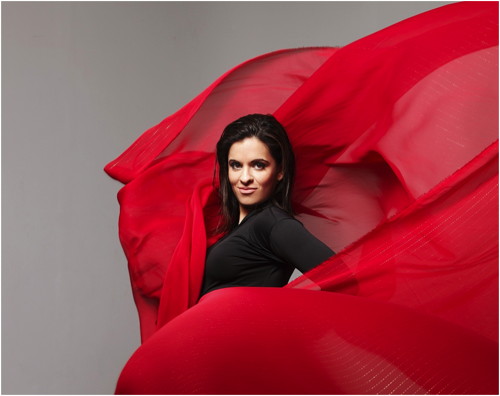 This weekend ONLY in L.A. — “Burq Off!” – a gutsy one-woman show – Los Angeles theater report

A bold, autobiographical one-woman show written and performed by Nadia Parvez Manzoor, Burq Off! is making its West Coast premiere with three shows this weekend only in L.A., with three more performances next weekend in S.F.

Directed by Tara Elliott, Burq Off! is a heartfelt solo one-act play that traces Manzoor’s search for identity and acceptance while navigating the cultural conflicts of her British-Pakistani home. With great humor and insight, Manzoor explores themes of sex, religion, culture, truth and family as well as the complexities of life as a Muslim woman living in a Western culture.

Burq Off! is a jaunty tour through madly opposing worlds. The glowing promise of modern London contrasts with the glum realities of a conservative Pakistani Muslim home, punctuated by fierce Bollywood dance moves and at least one blackout drinking incident.

Embodying 21 different characters — a domineering father, soulful mum, saucy English friend, and Islamic studies teachers whose interests range from slapping to pornography — Manzoor illuminates her conflicted sense of identity, while questioning repressive cultural norms. Moving, funny, deeply personal, and yet universal, Burq Off! explores what it takes to evolve past the veil.

“I want to encourage young Muslims, as well as non-Muslims, to have the courage to challenge the people who we love when our ideologies are in conflict,” says Manzoor, “It’s much easier to stay silent… when you question the ideas that you were raised with, it can be very scary. Yet, silence — not expressing your beliefs — also comes at a price.”

For a sneak peek, watch the trailer here.

Can be purchased online here or by calling the box office:

Can be purchased online here or by calling the box office:

Runtime is approximately 80 minutes, with no intermission.

Nadia Parvez Manzoor is an actor, writer and, producer. She spent her earlier years in a Pakistani Muslim home in North London, and has since moved from Singapore to Dubai, from Boston to her home base in Brooklyn. She teaches Improv and was trained at Improvolution, a Groundlings-based Improv School in New York City. She has performed regularly in the all-female Improv troupe Thirteen Degrees at various venues across New York, and has also acted in the Off Broadway play Pompa Pompa! (Theatre Row), where she played an old Cockney mother. In the past year she has created and acted in the web series Shugs and Fats, which is scheduled for release this summer. She is also a talented street dancer, and her skills include Popping, Hip Hop, Bollywood, and Bhangra. Manzoor graduated from Boston University with an MA in Social Work, where her passion was to merge the arts and social reform. Her one woman show, Burq Off!, is a manifestation of this intention. Her interests lie in asking provocative questions, and in challenging the status quo. To further fuse her interests in performance and social justice, she founded Paprika Productions, an all-female production company that produces works by brave, curious women.

Tara Elliott is a director, producer, performer, and educator who grew up in New Hampshire and arrived in New York by way of Chile, Maine, and Costa Rica. She makes theater wherever she goes and in myriad forms including traditional plays, site specific performances, and immersive experiences. Recently, she translated and directed the English language premiere of Illiterates (Robert Moss Theater) a prize-winning Chilean play and now a feature film. In the past two years, since moving to New York, she has been creating, directing, or performing with productions of Night, Still (HERE Arts Center), The Forgotten Life of Egon Schiele (The (Un)Fair), Rise Up Singing: Women in the Labor Movement (Lehman College), Rotenburg (Dixon Place), Two Girls, One Corpse (Arts at Renaissance), Casa de Pessoa (IATI Theater), and You Will Make a Difference (AliveWire Theatrics). Additionally, she teaches theater classes in public schools across Brooklyn and is committed to integrating performing arts into public school curriculum through teaching residencies. She received a BA from Bennington College where she studied dance and theater.

Jack Randall is a composer, producer, and multi-instrumentalist based in Brooklyn, educated at UCLA and in Iceland. First brought into theatre work by dramaturg Tom Bryant (Angels in America, The Kentucky Cycle), he has acted as sound designer, composer, and live score performer for a variety of plays including works by Tom Stoppard, Neil LaBute, and Edward Albee. He tours and records extensively with Brooklyn-based experimental ensembles.

Paprika Productions tells stories. Through theater, film, and event production, Paprika Productions is dedicated to curating and creating stories with humor and authenticity. Spicy, colorful, and bold, Paprika is a team of women who produce works that speak to the stories of women. And listen to them. And tell them, loudly.

– Sara Zweig, Letters from the Mezzanine

“Nadia P. Manzoor has the guts to put EVERYTHING out there.”

“I can’t begin to imagine the layers of cultural kneading that this piece required for all those involved, and I applaud Manzoor for her honesty and her uncritical perspective. Instead, she laid her life’s facts out for the audience to observe, and left us to find our own emotional and moral path through it.”

“Pure entertainment and a must-see!”

– Qurrat Ann Kadwani, Actress, Writer, and Producer of the Award-Winning They Call Me Q

“The play is full of familiar hilarity, scenes documenting what it’s like to be a Pakistani who is raised abroad.”