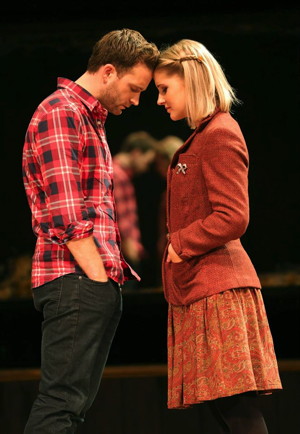 Attending the opening night performance of the national touring Broadway production of Once at the Pantages Theatre this past Thursday, starring Stuart Ward and Dani De Waal, I was reminded of the tagline on the poster of the movie that served as the source material for the original Broadway production, a winner of 8 Tony Awards in 2013, including Best Musical. The tagline was a question that read, “How many times do you find the right person?” The answer, of course, is the title of this tiny, independent Irish movie that was made on a shoe string budget and went on to become a world wide smash and eventually win the Academy Award for Best Original Song, the soaring romantic ballad, “Falling Slowly.” This same question could be twisted a bit to apply to this earnest, yet ultimately unsatisfying stage adaptation. The question now reading, “How many times can you catch lightning in a bottle?” No doubt the producers responsible for transferring the small gem of a movie to the Broadway stage were unwavering in their belief that the magic could be repeated, but unfortunately, the answer to this question is still just ‘once.’

Winner of Eight 2012 Tony Awards including Best Musical, Once is a truly original Broadway experience. Featuring an impressive ensemble of actor/musicians who play their own instruments onstage, Once tells the enchanting tale of a Dublin street musician who’s about to give up on his dream when a beautiful young woman takes a sudden interest in his haunting love songs.

As the chemistry between them grows, his music soars to powerful new heights… but their unlikely connection turns out to be deeper and more complex than your everyday romance. Emotionally captivating and theatrically breathtaking, Once draws you in from the very first note and never lets go. It’s an unforgettable story about going for your dreams… not living in fear… and the power of music to connect all of us.

The 2007 Academy Award-winning film, Once, was written and directed by John Carney, and starred Glen Hansard and Markéta Irglová, with original music and lyrics by Mr. Hansard and Ms. Irglová.

Where the original source material succeeded – and where the transplanted stage version ultimately falls woefully short – was in the unmistakable genuineness, nakedness, and truth in its execution and performance. The film was the definition of intimacy. As an audience member, it felt like you were invasively peering in on real life, almost like you were watching a documentary. And to a certain sense, that was true. Over the course of the making of the film, its two stars, Glen Hansard (who played ‘Guy’) and Marketa Irglova (who played ‘Girl’) actually did fall in love. It was a classic case of art imitating life as these two talented musicians – neither of whom had ever acted before – created both music and love together before the eyes of filmmaker John Carney, who documented it all so simply and minimally. Reportedly, there was no real script for the movie, just a basic outline of where they wanted the movie to go, and much of the dialogue was simply the natural banter and improvisation that took place between Hansard and Irglova. The result was something so beautifully heartfelt and truthful and real that the prospect of replicating that magic was somewhat unrealistic.

Hence, we come to the shortcomings of the stage version of Once. Film, by nature, is an intimate medium, and Once, as a movie, primarily follows the journey of ‘Guy,’ played by Stuart Ward, and ‘Girl,’ played by Dani De Waal. The role of the supporting cast is minimal, at best. While the story still primarily remains between the two leads in the stage adaptation, the roles of the supporting cast are beefed up considerably with questionable results. Irish screenwriter and playwright Edna Walsh (whose play Penelope is currently receiving a production at Rogue Machine Theatre Company in L.A.) penned the book for Once and largely turns the supporting cast into caricatured one-joke ponies. Piano storeowner Eamon (John Gardner) is turned into a sex crazed, ninja enthusiast and Dublin regionalist. The Bank Manager (Benjamin Magnuson) is turned into a gay, wanna-be musician whom Guy and Girl openly berate, telling him “not to sing… ever.” Girl’s Czech family and flatmates are turned into broad, Saturday Night Live-esque immigrant caricatures, with Alex Nee’s ‘Svec’ turned into an overly caffeinated, ‘wild and crazy guy.’

These character enhancements, presumably, were added to the show in an effort to fill out the story. I imagine the idea was to punch up the comedy, make the story a little flashier, a little more fun, but rather than improve the show, it dilutes the core of precisely what makes this story great. Though scenes are rearranged and some songs replaced by cuts from the first album of the Swell Season (the band that Hansard and Irglova formed after the completion of the movie), the story, itself, remains relatively simple. A fledgling Dublin busker (‘Guy’) is discovered singing his own music by a Czech immigrant (‘Girl’), who is a novice piano player, herself. She is wowed by his talent and decides to make it her mission to get him to not only pursue his passion of music, but also the passion of the subject of his music – an ex-lover now living in London. Over the course of the week they spend together trying to create a demo of his songs, we learn of both of their heartaches and struggles and passions. As can be expected, they fall in love, and yet, the outcome of their romance is not one of the traditional storybooks; the import of love in Once lying more of the import of a person at a particular moment in life, rather than in their remainder ’till death do them part. With the film, this relationship was more than enough to carry the story, much of which is told through the music of the soundtrack, which serves as the score to the musical.

Yet, the simple heart of the film is woefully diluted by all of the extraneous characterizations and jokes of the fleshed out supporting cast in the stage version. It’s almost as if they felt that the pure romance between the two leads would not be sufficient to sustain the interest of a Broadway audience. Is this an inherent problem in moving from art house intimacy into Broadway grandeur? Is it unrealistic to believe that that the grace in such a simple tale could translate to a larger venue? Could a more stripped-down version have remained and proved successful in a smaller, off-Broadway venue? These questions and debates could continue ad-nauseum, but the one thing that is unmistakable is that the transcendent quality of the movie does not survive the move to the stage.

Now, all this being said, here’s the kicker about Once; in regards to other fare coming from Broadway these day, this musical is comparably successful. If placed next to the outlandish excessiveness of most musicals coming from the Great White Way, Once is remarkably stripped down and effective. As with the Broadway production, the set (by Bob Crowley) remains a single structure – a rustic, half-moon-shaped bar placed centrally before the exposed brick back wall of the theatre. Locations are evoked by Natasha Katz’s unobtrusive, moody, and effective lighting, aided by simple props such as chairs and a piano. And then, of course, there is Hansard and Irglova’s score, which can cover up for much of the adaptive shortcomings merely through the force of its passionate and powerful songs.

The ensemble (who also serve as the orchestra, playing a variety of Irish folk instruments from fiddle to accordion to acoustic guitar) is effective, proving solid both in their playing and their singing. Unfortunately, the same praise cannot be said of the two leads. While Stuart Ward certainly deserves credit for trying to carve out phrasing and song interpretation that is distinctly unique and different from Hansard’s original, his “Guy” more often than not comes off as over-wrought and angst rather than smoldering, and his performance feels pushed and over-the-top. His pure vocal quality cannot be questioned, but his song interpretation carries a sense of flair, dramatics, and histrionics that, at best, feel excessive and at worst, intrusive. Dani De Waal’s “Girl” is less extreme, and she keeps her performance closer to the vest, which certainly proves more effective. However, her accent is almost cartoonish – a deficiency that is pervasive throughout the cast. It seems that the farther this production gets from Dublin, the harder it is to recognize its source location in the performances.

In conclusion, is Once a worthy effort, especially in light of abundance of feckless attempts travelling out of Broadway in recent years? Certainly it is. Is the music itself still uniquely moving and beautiful? Certainly. But if you want to experience the true power and potency of the story, you’re best off skipping the production at Pantages and simply putting the original film in your Netflix queue.

For tickets or more information about the Los Angeles engagement of ONCE, please visit the official website for Hollywood Pantages Theatre.

Tuesday through Friday at 8pm,

Once is recommended for ages 12 and up.  (Please note that in consideration of audiences, no one under 5 will be admitted to the theatre.)

Individual tickets for Once start at $25.00  Prices are subject to change without notice.