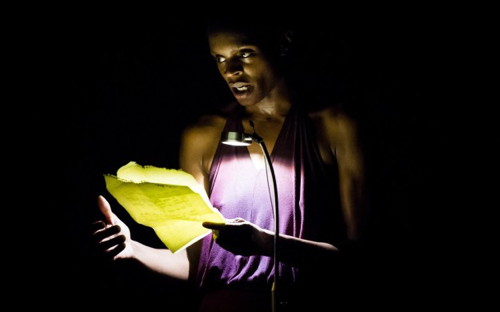 In the corner of the theatre, as the audience files in, performer Okwui Okpokwasili has already begun her tour de force. With her back to the crowd, she shows a flash of sleek, muscular, jittering, twitching, red/black flesh – rippling in a wine colored, open-backed, sundress. A see – saw violin and crashing bellows music is arranged to conform with and move against her gestures. Tall and wiry, like a gazelle, she moves like liquid, rasping and charging in air. Dust and flesh and sweat collect as she undulates. Around her, low table lamps nestle upturned, sideways, upright on the ground. Weeds and flowers and plastic bags spill across the stage floor.

A twitching marionette, Okpokwasili isolates her movements like a rickety cart correcting itself over deep stones, like a boxer readying, rallying his nerves in the corner of the ring. This vision is frenetic – as if the ring she works in has been precariously placed above subway rails. The once simple gesture of her left hand to her mouth creates an unknown semiotic. Her right arm stretches out, a loose electric wire undulating over the city. A wet earth sail, a scarecrow, a woman exhausting herself in memory, in dance, in duration, nearing ecstasy – we sense she is creating ceremony. Like a Balinese shadow puppet she breaks her body and brings it back every second.

For twenty minutes this goes on, and still she has not turned to face the audience. The music swells, a deep kettledrum, a deep subway sound rattles her motions ever higher. Like a body on a speeding train, she shakes endlessly, on the way. Then, gunshot music, kids calling, she is stirring, cooking, and still she doesn’t turn around.

Suddenly, the music falls to droning keys, an unseen hand on the shrill pipes. She steps backwards, and faces us. She pulls her dress away from her body as if to ventilate her heart. The twitching is ceaseless as a muffled newscast is heard. Suddenly her arms dive and arc behind her, as if she’s holding a mountain of snow, or another person on her back. She slides towards a standing lamp that is also a microphone. As she approaches it, she slows, and – as if perspiring on cue – she starts to glow and glisten. She stares ahead. On the ground are folded papers, pocket sized and yellow, wrinkled and unwrinkled – hand written notes. She takes one and unfolds it and begins starts to read.

Springing from an exploration of the West African griot storytelling tradition and the epistolary trope of letter-writing in Victorian Gothic novels, Bronx Gothic is an intensely physical solo performance by Okpokwasili. At the heart of this show is a series of notes that are secretly passed between two 11-year-old girls in a sex-saturated, mid-80’s 6th grade classroom.

What she shares is seemingly a conversation between two people; two Bronx schoolgirls relaying stories of sexuality, and the mysteries of pre and post pubescent awakenings. As she reads, she kneels and sings, slippery sweat falling onto the microphone. Her perspiration rushes onto the floor, through her dress; streams of sweat drops fall into the darkness. She falls onto the floor, designating sex moves, orgasm stories, “her sweating eyes.”   Two characters speak, fast and then slow, she intones, “Look up at the sky, now ask yourself, am I awake?”

Lying on her back, poems stick to her; she works her toes to curl backwards, her dress is drenched. This is ancient girl energy. This is a feminist griot. The griot holds and shares epic stories, of heroes and legendary men and women, but the griot sometimes does not tell stories from this kind of passage, from this bloody girl/dream. Okpokwasili valorizes and illuminates these powerful stories in an intensely satisfying way; she reminds us that girls are powerful, that girls are in transition, that girls are sexual. Girls are hungry, girls are dirty talkers when they want to be, they might be ruthless, funny, gritty, and wise. That this is an anomaly in parlance, in the theatre, in our literature, and collective consciousness is curious. We hear about boys heading out to become something, but not as often about girls… Do young women not burst forth into new worlds? Of course they do.

Okpokwasili reads, “No one break in, do graffiti all up in inside her,” She posits, “Ask me – can we be bound together?” She slaps her own face. How personal is too personal?   On stage, in intimate performance – is this catharsis, psychotherapy, a council, an exorcism? Is not this what is requested of the artist – to go where the others refuse?  Or is this the work of a minister or a medical doctor. Could all of these personas live within her?

Before the performance, a man and a woman were in a parked car, the man raging, jumping out of his SUV and crawling around to the woman’s door – animal, raging, spewing hate, and leaking all of his failures. I wondered if this was something they did notoriously, venting this way – I wondered if there was a way to see the woman’s face, to try to know if she needed help, the police, friends, rescue from his mania. I stayed, but not too close; I swung my leg as I pretended to wait for someone, I sipped my coffee. Still he raged on, and then glass was breaking. He muttered, that these were his things to break. Then the car peeled away. For a moment he looked at me, through the windshield like he was going to tear his SUV across the street and up onto the pavement where I stood – but the oncoming cars seemed to force him right.
Later, I wondered, is all of this grief and violence a contagion, something that landed on Okwui Okpokwasili and called to her that she could reshape and disintegrate?

Written and performed by Okwui Okpokwasili.
Directed by Peter Born.