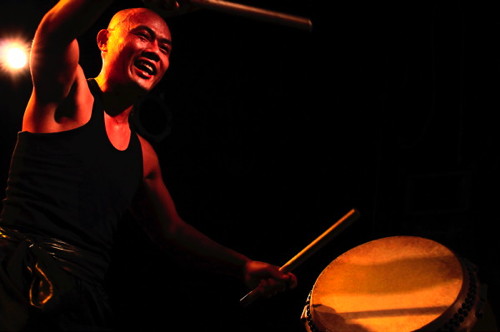 Some of the world’s top taiko ensembles and performers are set to converge on L.A. for a 3-concert series of mind-blowing percussion. Thrilling, heart pounding and joyous percussion are the hallmark of taiko drumming. L.A.’s Little Tokyo is the site for an exhilarating three-concert event. Taiko Nation is set to electrify audiences July 19 and July 20 at the Aratani/Japan America Theatre.

According to Japanese mythology, taiko music was created when a Shinto goddess emptied out a barrel of sake and jumped on the barrel’s head, stomping on it furiously to create compelling, percussive rhythms in her attempt to entice the goddess of sunlight from a cave where she had hidden. The other gods could not help but join in, dancing and singing joyously, and Amaterasu brought her light back to the world.

Los Angeles-based TAIKOPROJECT has been dazzling audiences with its unique contemporary blend of taiko, storytelling, music and choreography since its founding in 2000, performing in commercials, on TV and alongside musical superstars such as Stevie Wonder, Alicia Keys, Usher, John Legend and Justin Bieber.

This summer, in association with the Japanese American Cultural & Community Center, the Japanese American National Museum, and the Southern California Taiko Community, TAIKOPROJECT, brings together over 500 participants from taiko groups throughout the U.S., Canada, Mexico, Europe, Asia, South America and Australia for the inaugural World Taiko Gathering.

Activities will include three days of workshops, discussion sessions, taiko performances, and community-building activities, highlighted by the Taiko Nation three-concert series on Saturday and Sunday.

“It’s going to be amazing – and loud,” laughs project coordinator Masato Baba, “It will be the first time so many taiko players from all over the world will be together in one place.”

For more information and to purchase tickets, call 213-628-2725 or visit the official site here.