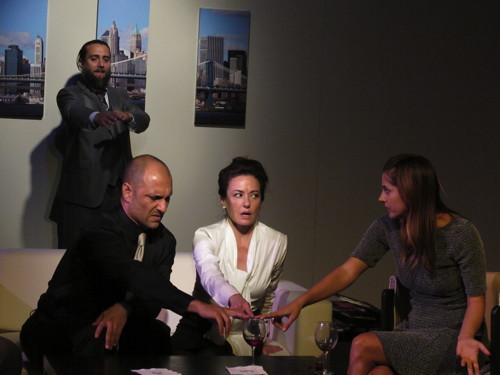 Hello fellow #LAThtr goers!
Here is an intro and link to my newest theater review for the critical website Stage Raw — which contains the latest arts and theater coverage from our intrepid team of journalists & critics.

Antony J. Bowman’s afterlife drama Somewhere… begins with his amiable central character, architect Michael (Josh T. Ryan), vividly describing his sudden death in a violent car wreck. Michael then proceeds to narrate the story from a state of limbo, observing his grief-stricken wife and best-friend colleagues during his wake and making wry observations throughout. It’s a nice dramatic device that, for the most part, works well. But unfortunately this poignant play lacks dramatic heft. The story basically meanders over the course of a long boozy evening through to the following morning. The cliffhanger reveal at the end of Act One comes as no surprise; it’s not overly signaled, it’s just a little too obvious. The inevitable climactic confrontations lack the momentum of well-orchestrated dramatic tension, something that a more experienced director (granted, Jeanie Drynan is a well-known and highly experienced actor) would have knocked into shape.

Nevertheless, Drynan shows her strengths in eliciting fine performances from her superb cast of six.