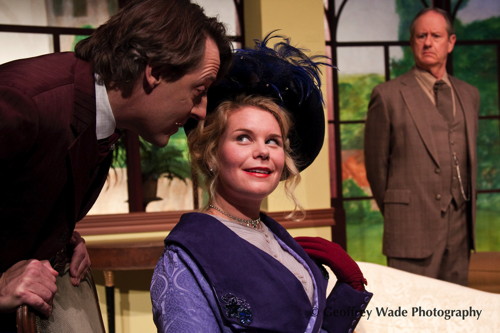 Gentle #LAThtr fans!
Here is an intro and link to my latest theater review for the critical website Stage Raw which contains the latest arts and theater coverage from our intrepid team of journalists & critics.

A Woman of No Importance

Oscar Wilde’s satire of English upper class society has solemn and feminist undertones to it that posits the mild dramedy of manners ahead of its time. After all, the play was first performed in 1893 at London’s Haymarket Theatre. The titular ‘Woman of No Importance’ turns out to be a survivalist who suffered scandal, estrangement from her father (and his fortune) and single motherhood in an age where that route caused irreparable damage to one’s reputation and social ostracism. Her disgrace is due to her being cast aside by an upper class fellow who preferred to dodge the whole affair and its untimely product. He, of course, maintained his social standing — a commonplace societal injustice Wilde dares to expose.

We meet a gaggle of toffs at someone’s country estate, circa late 1890s, as indicated by the glamorous embroidered gowns, tiaras and elaborate diamond necklaces. The idle chit chat that forms the substance of the play, especially during the non-eventful Act One, is the typical conversation, stylishly captured by Wilde, that observes and scathingly comments on frivolous upper class mores. Beneath these tableaux vivants of jolly high society runs a cautionary tale, examined during Act Two. It involves the maligned and bitter Mrs. Arbuthnot (a steely performance from Alexa Hamilton) and her son Gerald (Sean Gibson) who, now that he has come of age, has been offered a fine position with the newly anointed Lord Illingsworth (who has ascended to his title only a few month’s previously). Mrs. Arbuthnot is at first thrilled by her son’s promising new appointment — that is, until she learns who his new employer is to be…

A Woman of No Importance by Oscar Wilde.

Sunday Matinees December 7 and 14 at 3pm.

***Friday, November 21: DONATE WHAT YOU CAN.***
It’s “Pay What You Can” with a twist! Half of all proceeds for this performance will be donated to Prototypes, whose mission is to rebuild the lives of women, children and communities impacted by substance abuse, mental illness and domestic violence. Tickets that night may only be purchased at the door.