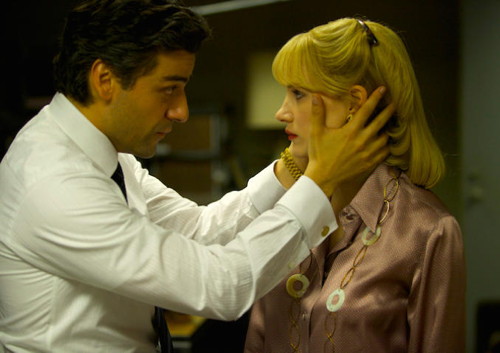 The year writer/director J.C. Chandor refers to in the title of his excellent new film is 1981, a time when New York City was literally awash in crime. But in A Most Violent Year, the filmmaker takes what could have been another blood-spattered mob movie and transforms it into an intense character study worthy of Sidney Lumet or Francis Ford Coppola in their prime.

Abel Morales (Oscar Isaac) is the son of immigrants, struggling to get his share of the American dream. Beginning as a driver for a local fuel supply business, he has risen over the subsequent two decades to become its owner, expanding the company to the point that it’s grown big enough to become a major player — and to draw the unwelcome attention of competitors who are hiring thugs to hijack his trucks and steal his fuel.

And his own origins aren’t exactly pure. He bought the company from a mob kingpin and married said kingpin’s daughter, Anna (Jessica Chastain), who is just as driven as he is — and even more ruthless.

Abel is on the verge of closing a major deal that will give him ownership of a vital waterfront storage facility that would crush the competition and solidify his company’s dominance once and for all. However, the continued attacks and the threat of indictments from the District Attorney’s office are putting a big crimp in his plans. To make matters worse, he has 30 days to deliver the rest of the money to the property owners or he will forfeit his preliminary investment — his entire life’s savings.

The local Teamster leader (Peter Gerety) advises him to arm all his drivers with pistols, an action his lawyer (Albert Brooks) wholeheartedly endorses, but Abel doesn’t want to sink to such gangster tactics. Anna is appalled by his reticence, especially when their family is threatened by intruders in their own home. She demands that he fight back — or she’ll take matters in hand herself. Feeling such pressure from all sides, he tries to solve his problems the best way he can, even if it means making compromises in his integrity, such as it is.

Abel has convinced himself that he’s leading the life of an upstanding businessman despite evidence to the contrary. He tells the DA that he has nothing to hide and refuses to do anything that might be viewed as less than honest. Yet when he is training a group of young sales recruits on how to engage new customers, it sounds just like he’s teaching them how to pull the big con.

And when his banker nervously pulls the financing on his big deal after one of his trigger-happy drivers opens fires on thugs trying to steal his truck, his ostensibly lofty morals become even more malleable.

Isaac brings a Pacino-like intensity to the role of Abel. This similarity is reinforced when he calls a Godfather-style meeting of all of his competitors at one of those darkly-lit New York restaurants to tell them to cease the hijacking of his trucks. Sitting at the head of the table, he utters a one-word warning: “Stop.”

Chastain’s Anna is tough and single-minded, deriding Abel’s weaknesses and constantly steamrolling over him to deal with their problems herself. Indeed, their relationship seems far more like a business partnership than a marriage. Even their occasional demonstrations of affection — a brief caress, a kiss on the cheek — feel alien and awkward.

Chandor sets his film in the dead of winter, highlighting the dirty back alleys, dusty truck lots and graffiti-stained subways when the city was at its most foul. Ironically, the bejeweled Manhattan skyline is seen only from behind the oil storage facility that Abel is sacrificing everything to acquire — and it sprawls tantalizingly across the river, unreachable, looking for all the world like the glittering mythical city of Oz.

Anyone expecting an explosively violent ’80s-style actioner should look elsewhere. However, those seeking an intelligent, character-driven examination of the overwhelming forces of corruption — and the ends a man will be driven to in order to achieve his goals — will be well rewarded by this superbly crafted piece.

A Most Violent Year is now playing in selected Los Angeles cinemas.