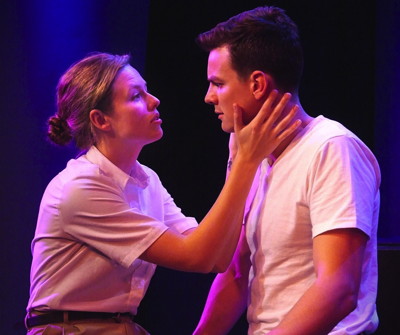 Scientology, as a religion and as a semi-cult, has been earning censure since it was first launched in 1953, thanks to its dubious connections to the norms of religion: belief in a strong afterlife and the ability of its gods to intercede on behalf of humanity or the individual believer. The stars must be in alignment for Scientology-bashing, what with Alex Gibney’s new documentary, Going Clear: Scientology and the Prison of Belief opening a week after this play makes its world-premiere.

Credit playwright Allen Barton for pulling from his long experience in Scientology to make his play, Disconnection, as realistic as possible. Set in contemporary California, Landon (Jay Huguley, alternating with Bo Foxworth) is a concert pianist who decides he needs to leave the Church (which is never outright named as “Scientology.”). He has had enough of the phony proselytizing and the way the leaders attack the credibility of any and all outside critics (including theatre and film critics).

Landon’s daughter Tess (Carter Scott in a luminescent performance) is an assistant to the Church’s psychotic leader, ‘the Chairman’ (powerful Everette Wallin). She begins questioning everything around her, bringing trouble to her husband, Nick (Luke Cook), a devout supporter of the Church. And Landon is about to fall-out with his mentor and early piano-teacher, Michel (Dennis Nollette), over his decision to leave, because once you make the decision to flee, you are disconnected from everyone around you – not unlike other cults, or the Mormon Church, for that matter.

Barton has written a talky, but extraordinary, drama, one designed to infuriate Scientologists and edify the rest of us. He has even written a proto-L. Ron Hubbard character, Oldman (Robert L. Hughes), a man facing his mortality who is living his last days with intense regret.

Director Joel Polis and producer Gary Grossman have cast Disconnection impeccably, with newcomer Scott laying the groundwork for an illustrious career: her reality on stage – her fine use of silence – abetting her acting talents, along with her beauty, suggesting a long artistic career. Ably supporting her is Huguley, Nollette, Wallin, Cook and Hughes. Every actor brings a strong sense of the character’s self and the actor-training is abundantly apparent. Wallin stood out sturdily with his Chairman’s monomania – articulate and nutty as he is, you can’t take your eyes off him.

Jeff McLaughlin’s set and lighting design keep us always involved, even when the monologues begin to wane, but this play and its superb production make you want more of the same from this first-rate writer.

Disconnection is being performed by the Skylight Theatre Company at the Beverly Hills Playhouse,