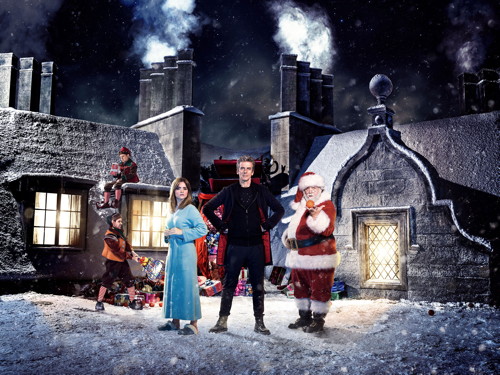 The Doctor Who series – one of the longest-running adventure dramas in television history – is definitely not for everyone’s taste. The stories, all science fiction in nature, tend to the obvious and great exaggeration. But they’ve become iconic for a certain segment of the population due to their charming Doctors, who are changed every few years.

Number twelve is the great Peter Capaldi, now the oldest doctor since the first one, William Hartnell, back in 1963 (until ’66). They always have a female sidekick (cute Jenna Coleman here) and while the series has faltered, it’s still going strong with younger viewers with outlandish tales of the Time Doctor from God-Knows-Where battling enemies of humanity (even though he’s technically not human – just looks like one).

And there’s always a Christmas show for heart-warming tugs of fantasy. This year has Doctor Who and his grownup assistant, Clara (pixie-ish Coleman), finding Santa Claus (played by ironically-named Nick Frost) and two elves (Dan Starkey and Nathan McMullen, both very funny with their snarky comments), to save them all from the mental invasions of some ugly aliens.

The episode works if you wish it to. Normally what saves us from some of the outlandishness are the social commentaries that re-booter/writer Stephen Moffett plants for us to cogitate on. Unfortunately, there are none here this time around. But director Paul Wilmshurst keeps the action going and with a talented cast makes it at least tolerable even if, by the end, you might not care who killed whom.