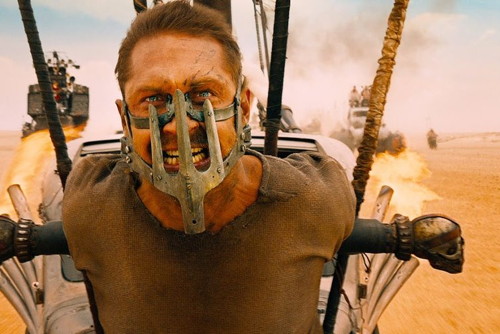 Pure action films are definitely a tricky business. If you hurl machines, bodies, and buildings at your audience for two hours without rhyme or reason, accompanied by a relentlessly crashing and slamming soundtrack, you risk inducing boredom.

However, if you present the same action in comprehensible, well-edited, and exciting sequences, you’re more likely to keep them riveted. Happily, George Miller has once again achieved the latter — in spades.

Miller, whose original Mad Max blasted onto the scene more than 35 years ago, makes a triumphant return to the Wasteland and, at age 70, shows that he’s still able to school younger filmmakers in how one does action right.

His outrageously exciting Mad Max: Fury Road is a garishly-colored jolt of adrenaline that strips plot to the barest minimum in order to deliver the bone-crushing goods. From its striking opening scenes, Fury Road hurtles us back into Max’s world, giving us in shorthand everything we need to know about the society in which he now dwells. No superhero, Max (Tom Hardy) is a mournful survivor suffering from PTSD who’s immediately kidnapped by the “War Boys” of Immortan Joe (Hugh Keays-Byrne), the half-human, half-machine leader of a society of cliff dwellers that keeps its subservient populace under control with the occasional gift of precious water, pumped from underground wells to a surface that has been irreparably blighted by man.

Right off the bat, Max finds himself literally attached as a “blood bag” to insane War Boy Nux (Nicholas Hoult), who is desperate to earn the affection of his master and be carried henceforth through the gates of Valhalla. When word reaches Joe that one of his prize warriors, Furiosa (Charlize Theron), has gone rogue, kidnapping his harem of breeders and escaping his realm, Nux snatches his chance to get them back and earn his reward.

Thus the stage is set for a two-hour chase that, in less talented hands, would become stultifying, but Miller knows how to keep the engines revving. He’s always had a gift for populating his Max films with interestingly bizarre secondary characters, and Fury Road is no exception. In addition to Joe’s army of maniacal War Boys on a fleet of vehicles modified for maximum mayhem, there’s a canyon-dwelling motorcycle gang, a strange group of stilt-walking swamp-dwellers and — most surprising for this genre — a mob of elderly female warriors who provide a link to Furiosa’s past and hold the key to the world’s survival.

In a surprising but well-realized twist, it’s the feminism that Miller introduces into the film that is refreshing. Brian Tallerico at rogerebert.com says the director consulted with no less an authority than Eve Ensler, author of “The Vagina Monologues,” on the script, and it results in a depiction of female empowerment that’s free of cliché and so rare for this genre. These women are here to take back the earth from filthy dictators like Joe, whose only interest is to spawn a male child — which flatters his disgusting ego, but is a dead end, reproductively speaking. Even the breeders, who could have merely been a simpering, cowering lot, have strong wills of their own.

As far as the performances go, Theron is magnificent as the conflicted Furiosa, who’d been snatched from her peaceful existence to slave for Joe (and lose an arm in the process) before finally rebelling to rescue the breeders to take them back to her Green Place. Like Max, Furiosa is a strong and silent type, but Theron lets us know what her character is feeling with her eyes.

Hardy’s Max is an impenetrable cipher at first, but he also manages to win us over. Initially loathing all human interaction (his opening narration informs us: “Who was more crazy? Me or everyone else?”), he aligns himself with Furiosa’s cause and even convinces the erstwhile antagonist Nux to fall into line.

As for Nux, Hoult goes full-bore in his depiction of this religiously insane character, kicking his pretty boy image to the curb with a bald pate, crazy eyes, and a painfully scarred torso. And, like Theron’s Furiosa, he’s got a soul in there somewhere just dying to come out.

The action, as previously mentioned, is off the hook, with Miller utilizing as many real stunts and actual mechanical vehicles as possible. According to the Miami Herald, he lured the 72 year-old Oscar-winning cinematographer John Seale (The English Patient, The Talented Mr. Ripley) out of retirement to give Fury Road a decidedly old-school vibe, including the familiar trick of undercranking the camera to give the action a surreal speed. Miller also bucked the trend of dark, washed-out post-apocalyptic films, and this one pops with vivid reds and oranges — and gleaming chrome. I was concerned about a score by a composer named Junkie XL, but it’s just as intense and orchestral as the earlier work of Brian May (The Road Warrior).

I saw Fury Road in 3D, and it’s fun, but it’s really not necessary to relish Miller’s terrific return to the genre he created.