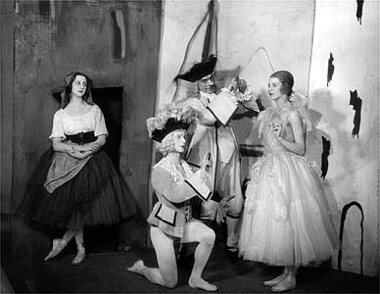 “From the city of Oranienbaum-Russia, where he was born in 1882, until his last journey to the Island of San Michele-Venice in Italy where he was buried in 1971, Igor Stravinsky spent almost 28 years in Los Angeles.

Strangely, a lot of people still do not know that for a long period of time, the Russian-French-American Master lived in a beautiful house located on North Wetherly Drive, above Sunset Boulevard.

Just a few years ago, as one of his neighbors, I discovered that this mansion was for sale, so I decided to go there for a kind of pilgrimage. I will always remember how emotional it was for me to enter into this impressive, exquisite and symbolic place, where the famous composer wrote some of his most wonderful and so famous scores…

But at the same time, I felt really sad that the Real Estate representative there did not mention anything about him, even when I was talking about Igor Stravinsky, he did not seem to know who this person was. Still today, it seems that there is no commemorative plaque fixed outside the house, or on the front wall, to pay a tribute to this giant composer, pianist and conductor.” A remembrance by Francois Chouchan.

Commissioned by Sergei Diaghilev, and after Firebird, Petrushka and Rite of Spring, the ballet Pulcinella was finalized by Igor Stravinsky in April 1920, and Premiered a few months later by the Ballets Russes at the Opera de Paris. The idea came first from the Russian Impressario, who asked his friend to get his inspiration from some of the eighteenth-century scores written by the famous Italian Composer Pergolesi, but also  between some almost unknown Composers as Domenicio Gallo, and Carlo Ignazio Monza.

Considered like one of the first piece of the Neo-Classicism, the subject of this multiple episodes’ ballet was Pulcinella, the main character of the Neapolitan commedia dell’arte. With Pablo Picasso who created the sets and the costumes, and Leonide Massine who did the libretto and the choreography, the premiere in Paris was highly acclaimed.

Following this success, Stravinsky and his family decided to move to France, where they lived for a several years. In a difficult financial situation, the composer was helped and supported by the famous fashion designer Coco Chanel. He also decided to join the Pleyel Piano Company, through a partnership.

In 1932, Igor Stravinsky, in collaboration with his good friend the famous Cellist Gregor Piatigorsky, decided to work on a new piece for Cello and Piano, directly inspired by his “Suite Italienne”, extracted from the original score of his Pulcinella ballet.

“I began by composing on the Pergolesi manuscripts themselves, as though I were correcting an old work of my own. I knew that I could not produce a forgery of Pergolesi because my motor habits are so different; at best, I could repeat him in my own accent.”

With the same ironic and humorist spirit as his original ballet, this new piece written for cello & piano in five movements, keeps this magical feeling of the past. It is considered one of the most beautiful works of the cello repertoire.

This exquisite recital will be performed
by two World Renowned Virtuosos:

In an intimate setting, without any stage or separation between the audience and the artists, feel the essence of Chamber Music, and immerse yourself in the “heart of the Art” to become one with the Music.

A French Champagne reception with a Gourmet Buffet catered by Patina follows the performance, and the Q & A between the Artists and the audience.

(Special offers are available on line.)

*(Including French Champagne, and gourmet sandwich buffet catered by Patina.)