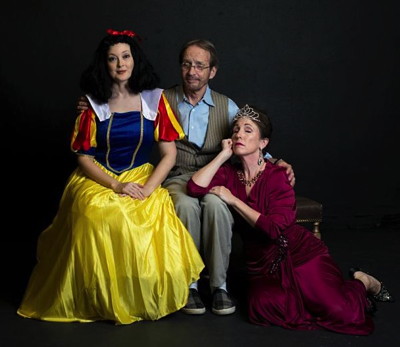 The Classic Theatre finishes off its 2014-15 season with a well-mounted production of Christopher Durang’s Tony-winning comedy, Vanya and Sonia and Masha and Spike.

Vanya (John O’Neill) and Sonia (Anna Gangai) live together in their family home in Bucks County, Pennsylvania. Having spent the prime of their lives taking care of their now-deceased, theater-loving parents (hence the Chekhovian names), they’re middled-aged, unemployed and inexperienced in the ways of the world. Their housekeeper, the aptly-named Cassandra (Danielle King), is their only regular visitor, constantly delivering dire predictions that neither believes. They spend their days waiting for the blue heron to come to the pond and arguing whether ten cherry trees are enough to constitute an orchard.

Their existential malaise is interrupted by the arrival of their movie star sister, Masha (Emily Spicer), who breezes in with her much younger lover, Spike (John Stillwaggon) in tow. She also comes bearing upsetting news. Her career is at a standstill and she is forced to sell the house as she can’t afford to support her siblings anymore. Thus the stage is set for an evening of accusations, revelations and resentments — plus a dewy ingénue (McKenna Liesman) and a couple of dwarves.

Durang, best known for his biting comedies and satires (Beyond Therapy, The Marriage of Bette and Boo), is in a mellower mood here. There are Chekhov references aplenty, but it’s not overdone. His characters bicker and insults are flung, yet there’s a recognizable humanity within each of them. Perhaps he indulges them a bit too much in the second act, but there are many laughs in the piece, particularly when he can squeeze in such groaners as ingénue Nina deciding to start calling Vanya Uncle Vanya. And the Chekhov gloom is hilariously skewered when the sisters literally throw themselves to the floor in soul-searing agony.

The actors all inhabit their roles with skill. Spicer’s Masha delivers the right mix of narcissism and insecurity, complemented by Stillwaggon’s lunkheaded himbo. O’Neill’s Vanya is dryly acerbic at first but he catches fire with a lengthy second-act lament about way things used to be. King is clearly having a good time as the soothsaying housekeeper, and Liesman does a nice job as Nina, whose sunniness would be irritating if it didn’t feel authentic. Gangai has the meatiest role playing the adopted (as she frequently reminds everyone), perpetually-in-agony Sonia, and she makes the most of it. Director Diane Malone smartly keeps the staging simple in order to focus on the humor.

Speaking of staging, the Classic Theatre’s space is unusual. Tiered seating on both sides of the stage eliminates a back wall, which is effective for a single-set piece such as this. Scenic designer Karen Arrendondo takes full advantage of this configuration, transforming the entire theater into the family’s home, inside and out.

Vanya and Sonia and Masha and Spike plays Thursday through Saturday at 8 p.m. and Sunday at 3 p.m. through May 17 at the Classic Theatre, 1924 Fredericksburg Road, San Antonio. Reservations can be made online or by calling (210) 589-8450.