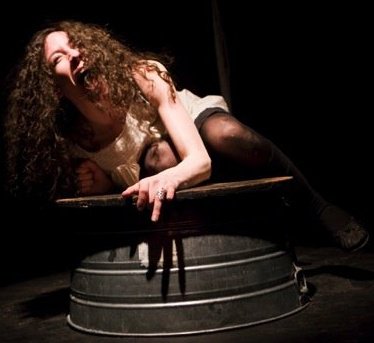 No Traveler: A Comedy About Suicide

Playwright/performer Penny Pollak debuts her one-woman show at this year’s Fringe, and it’s an event that was well worth the wait.

A disturbed young woman, in a desperate cry for attention, slashes her wrist with a straight razor, only to awaken in a vomit-filled bucket trapped in purgatory. Her only road to salvation is to save another soul from the same fate.

What follows is a fast-paced, frequently hilarious journey through the darkness of the mind, with Pollak skillfully inhabiting all the characters in this avant-garde performance piece.

Pollak integrates music and dance to create a netherworld inhabited by desperate souls in search of redemption. With her expressive face and acrobatic abilities, she literally throws herself into her work, mining the dark subject matter for insight and comic gold, no matter how bitter the taste. Certainly these are characters whose stories and predicaments are universally familiar, having affected all of us in some way.

As Pollak herself says, laughter is the best way to recover from tragedy, and No Traveler is certainly a powerful tonic against the frequent misery of the human condition.

No Traveler: A Comedy About Suicide plays at the Hollywood Fringe June 19, 26 and 27 at the Ruby Theatre at the Complex, 6476 Santa Monica Blvd. Tickets can be obtained on the Fringe site.

Danny and the Deep Blue Sea

It’s the tale of two lost souls who meet in a dive bar and come to realize that each is the other’s last chance for happiness. They clumsily attempt to forge a relationship that’s equal parts abuse and affection. Robbie (Nathan Sutton) is still trying to recover from an earlier incident of abuse involving his father, while Danny (Munda Razooki), known as “the Beast,” has been drained of emotion by the ugliness of life. Together they try to heal their wounds and chart a course for happiness.

For the most part, Shanley’s work can easily be transferred to a pas de deux between two men. Hotheaded Danny at first resists Robbie’s romantic overtures, but when he finally relents, he goes all-in, only to be rebuffed by a suddenly coy Robbie. Then it’s Danny’s turn to lash out in anger. But when they both speak longingly about getting married in a beautiful garden — with Robbie in a traditional white dress — it’s a peculiar pronouncement.

Both actors fulfill their roles well, particularly Razooki, whose uninhibited performance gives us a glimpse of the beast within. But the character transposition remains an interesting experiment rather than the provocative statement the company may have aimed for. The show’s final performance was Sunday, June 14th, at 7:45 p.m. at the Dorie Theatre at the Complex, 6476 Santa Monica Blvd. More information can be obtained on the Fringe site.