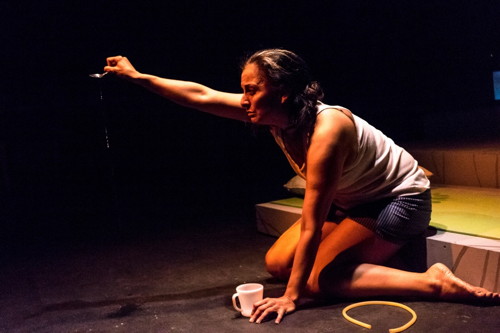 Winner of the 2012 Pulitzer Prize for Drama, Quiara Algeria Hudes’ Water By the Spoonful is the middle play in a Philadelphia-set trilogy that centers on Elliot Ortiz (Paul Ramos), a wounded Iraq war veteran who is suffering from PTSD and various family issues.

As the first act opens, Elliot’s is working for minimum wage at a sandwich shop but dreams of becoming a movie star. He’s also serving as caregiver for the beloved aunt who raised him and whose death is imminent. His older cousin, Yazmin (Julya Jara), tries to lend support, but she has work obligations of her own plus marital troubles.

Meanwhile, in cyberspace, Odessa (Gypsy Pantoja) runs a chat room for recovering addicts. Highly moral and seemingly in total control, she oversees the interactions of the participants, including Orangutan (Sarah Boyd) and Chutes & Ladders (Kevin Majors), and is quick to censor them when they swear. When a new arrival, Fountainhead (Michael Holley), logs on to seek support, he is quickly besieged by the others, who accuse him of being a phony. Odessa intervenes, offering to meet Fountainhead in the real world to help him in his recovery.

Act Two sees these two worlds merge. Odessa is revealed to be the mother who lost custody of Elliott and is responsible for the death of his infant sister due to her drug addiction. Elliot’s bitter confrontation with her after his aunt’s death — and her ensuing guilt — causes Odessa to spiral into relapse, and Fountainhead becomes her unlikely source of support.

Ramos does well by Elliot, providing the character with the necessary dimension as he evolves throughout the piece. Jara also gives fine support as cousin Yazmin, but it’s Pantoja as Odessa who turns in the most memorable performance here. Her transformation from a smarmy cyberguru to a literal open wound of a human being is absolutely mesmerizing. Of the chat room participants, Holley is too strident in the first act, but he becomes more sympathetic when he steps up to help Odessa.

In her effort to make sure every character in the piece is fully realized, the playwright may have overplayed her hand somewhat. She gives Orangutan and Chutes & Ladders a story arc that’s not completely convincing, and there are a few too many climactic scenes. That said, the overall themes of addiction, family bonds and redemption still come through powerfully.