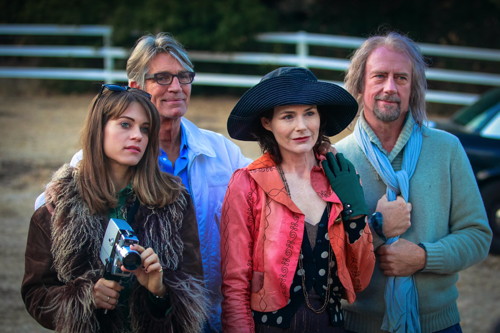 San Antonio Film Festival Wrap-Up: An Interview with the “Moments of Clarity” Team

Of the many films I saw at the San Antonio Film Festival, which took place July 28th through August 2nd, a standout for me was a feature entitled Moments of Clarity, a refreshingly offbeat comedy with a unique sense of style and a strong cast.

It’s the story of the ever-cheerful Claire (Kristin Wallace), a naive young woman whose upbringing by an agoraphobic mother (Saxon Trainor) has kept her sheltered from the troubles of the real world. When she accidentally breaks a movie camera belonging to Danielle (Lyndsy Fonseca), the hostile daughter of her beloved pastor (Mackenzie Astin), she offers to replace it, prompting an unexpected road trip. Along the way, an authentic friendship develops between the two as they uncover some painful truths about their lives — as well as some equally joyful revelations.

Moments of Clarity has such a distinctive voice and solid production values that I wanted to know more about its development. Happily, the film’s star and co-writer, Wallace, its director, Stev Elam, and its producer, David J. Phillips, were all more than willing to answer some questions for me.

There are often parallels between works of fiction and real-life situations that spurred their genesis. Do any such parallels exist with Moments of Clarity?

Kristin Wallace:  Most definitely. Moments of Clarity spawned from my life experiences while I was going through this “quarter life crisis” of self-discovery. I met [adult film star] Ron Jeremy and had no idea who he was, which — even if you don’t watch his movies — seemed ridiculous to others. I found it humorous how people perceived me versus who I thought I was. I wanted to explore these dualities in people and have it centered around fresh female characters.

Tough guys Eric Roberts and Xander Berkeley are cast against type as a loving couple in the film — and they’re really great. How did they become involved with the project?

Stev Elam: Xander is a friend of mine. We met in 2009 on a Museum installation project that I directed called The Gadfly, and Xander played Socrates. I called Xander and asked him if he was interested in playing a same sex couple that owned a bed and breakfast, and that we were thinking of casting him and Eric Roberts. He loved the idea. Xander and Eric know each other, but haven’t ever worked together, so they both were very interested.

David J. Phillips: Thankfully, I knew Eric Roberts’ manager Peter Young very well. Both Peter and Eric responded to the script really well and were helpful in making it all work out.

Moments does a great job telling what is essentially a serious story by placing its characters into absurd situations. How has audience reaction been?

KW: Thank you. We wanted the story to have humor and lightness to it. You are seeing the world through Claire’s eyes, which is a very positive place, despite her obstacles. Boston had a very emotional response to the film, which was incredible, while San Antonio found it really funny, which was so much fun. We want this road trip adventure to be one of multiple emotions.

SE: You always hear all this talk about demographics, so I’m always blown away by the wide range of people who respond to the film. The thing I like to hear most is that people find it both funny and touching.

DJP: I love when I hear people laugh at the weird stuff we found funny while we were editing… that’s always nice. Our film ultimately has a message of optimism, so its nice to see people affected.

KW: The challenge was to not lose sight of the big picture, the heart of the story and characters. Playing Claire and being inside that childlike, optimistic world was an exhilarating joy ride. I had some fun!

SE: Most challenging thing for me was the shooting schedule. Some of our days we shot 12 pages a day. In regards to fun, nothing beats muffin day.

DJP: Yeah, the shooting schedule was tough due to locations and budget, but Evan Robichaud, our 1st AD, was a champ, working with Stev to get everything we needed. The most fun for me is now — seeing everyone’s hard work pay off with good responses and getting into cool fests.

Where was the film shot? How did you secure locations?

DJP: The film was shot in California, and we begged, borrowed… and paid where we had to.

What was the shooting budget and how was it raised? Did you utilize social media?

KW: We shot the film for under 1M. We reached out personally to our network and worked hard to attach the right investors for this project. We’ve had a great time working with them.

DJP: Yes, we’ve been lucky that they believed in our quirky little movie and have supported our decisions.  As far as social media, we use it to keep fans and cast and crew updated on Twitter and Facebook.

What cameras and editing equipment did you use?

How long was the shooting schedule?

SE: We had a 15 day shooting schedule.

DJP: And a day of pick-ups…so I guess that technically makes 16?

The types of cameras and editing equipment available today make it so much easier for anyone with a vision to make a “real” movie. What words of advice would you give an up-and-coming filmmaker?

KW: Even though it’s easier now to just jump right in, make sure your story and the foundation is as tight and seamless as possible before you begin shooting. Know why you are telling the story — that way you’ll get the clearest message across regardless of what equipment you use.

DJP: Work with talented people, and let them use their talent.  The best work comes from collaboration — work with people you trust enough to put your ego aside, and if everyone does the same, that’s where the magic happens.

How do you think the indie film scene will transform in the next five to 10 years?

SE: I’m optimistic about the future of Indie films, especially when you factor in multiple platforms like VOD and home media. I’ve seen my friends and families taste in films grow because of this new form of distribution. That said I still feel the best way to see a film is in the theater and I think new technology will push the theater experience for future audiences.

DJP: I see online indie festivals having a place — more niche markets where people can find people with similar interests and watch and review films together.

KW: I feel that female filmmakers and female voices are going to become more well known in the indie scene; they will be more accessible and more of the norm. I think there really is a movement to get female voices heard. With all the new ways to buy films, I think indie films in general will become more profitable and mainstream. Or I sure hope so — because I love them 🙂

Moments of Clarity will be screening at the San Diego Film Festival (Sept. 30-Oct. 4), the NYC  Independent Film Festival (Oct. 12-18) and the Napa Valley Film Festival (Nov. 11-15), with more engagements to be announced.