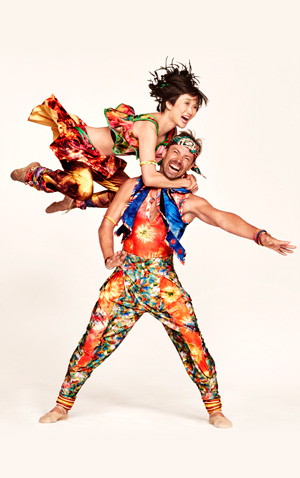 A 4th performance has been added
Sunday, October 4 at 2pm

Additionally, an extra special free public event — Twyla Tharp’s “The One Hundreds” — will be taking place at The Wallis on Tuesday, September 29, 2015 at 6:00pm. More information about how to participate can be found by calling 310-746-4000 or by going      online here.

Twyla Tharp’s 50th Anniversary Tour is a double bill of premieres celebrating Twyla Tharp’s 50th Anniversary. In each premiere, Tharp turns her decades of experience – having choreographed Hollywood films, television specials, Broadway shows, figure-skating routines and full-length ballets– into living proof that time is her partner as she continues to deepen and expand the singular imagination which makes her one of the century’s most treasured artists.

By combining different forms of movement – such as jazz, ballet, boxing and inventions of her own making – Tharp’s work expands the boundaries of ballet and modern dance. John Zorn provides the show’s vibrant introductory Fanfare, followed by brand new works Preludes and Fugues set to J.S. Bach’s “Well-Tempered Clavier” and Yowzie set to the raucous humor of Henry Butler and Steve Bernstein’s jazz.

The Wallis and four national powerhouse co-commissioners – the Auditorium Theatre and Ravinia Festival in Chicago, the Joyce Theater in New York, the Kennedy Center in Washington D.C., TITAS Presents and AT&T Performing Arts Center in Dallas – have joined forces to present this Anniversary Tour.

Also, as part of Twyla Tharp’s 50th Anniversary Tour, a free performance of Tharp’s “The One Hundreds,” originally premiered in 1970, will be offered at The Wallis on Tuesday, September 29 at 6:00pm, and will launch The Wallis’ 2015 – 2016 Season of performance programming.  It will be performed by Tharp’s company and 100 members of the Beverly Hills-Los Angeles community at The Wallis, followed by a reception.

Instead of creating the expected for her 50th Anniversary Tour – a retrospective of her greatest hits – Twyla Tharp’s restless spirit demanded she choreograph two brand new works for her troupe of 13 dancers.  This ten-week cross-country celebration, opens at the AT&T Performing Arts Center, presented by TITAS, in Dallas on September 18-19 and concludes at Lincoln Center’s Koch Theater, November 17-22.  The five commissioners of “Preludes and Fugues” and “Yowzie” are The Joyce Theater (New York), The Kennedy Center (Washington), Auditorium Theatre & Ravinia Festival (Chicago), TITAS/AT&T Performing Arts Center (Dallas), and The Wallis.  The Anniversary tour will also include stops in over 15 cities.

“We are honored to be a co-commissioner of two new Twyla Tharp works that she is creating for this momentous celebration of her art,” said Patricia Wolff, Interim Artistic Director at The Wallis.  “Although we are only in our third season, we are finding ourselves a part of supporting important artists and projects to finding larger audiences, whether it be our bringing Deaf West’s Spring Awakening to our stage, which helped propel it to Broadway, or being a early presenter of Jessica Lang Dance, or giving pianist Igor Levit a venue for his Los Angeles debut.”

The company is comprised of dancers who have long histories with Tharp, appearing in her Broadway shows, Movin’ Out, The Times They Are A Changin’ and Come Fly Away, as well as in her various dance troupes and in the ballet and contemporary dance companies for whom she has created new works. They are John Selya, Rika Okamoto, Matthew Dibble, and Ron Todorowski. Newer to Tharp are Daniel Baker, Amy Ruggiero, Ramona Kelley, Nicholas Coppula, Eva Trapp, Savannah Lowery, Reed Tankersley, Kaitlyn Gilliland, and Eric Otto.

A 4th performance has been added
Sunday, October 4 at 2pm

About “The One Hundreds”

As part of Twyla Tharp’s 50th Anniversary Tour, at The Wallis there will be a performance of Twyla Tharp’s “The One Hundreds,” free to the public. The work, which premiered in 1970, remains an ongoing statement of Tharp’s belief that anyone–and everyone–can dance. “The One Hundreds’ is a hundred eleven-second segments that are performed by two dancers in unison separated by four seconds between each segment.  The volunteer participants performing in it prove that idea at each performance.

Each of the one-hundred non-professional volunteers receives a 15-minute learning session for their phrase, by one of Tharp’s company members earlier in the day, coming together as a unit to work out the spacing just an hour before show time.  They are a hardy, brave and diverse bunch of adventurers.

Claudia Roth Pierpont said in The New Yorker, “’The One Hundreds,’ an experimental work from 1970, a moment when ordinary people, doing ordinary moves, had transfixed the dance avant-garde. ‘The One Hundreds’ opens with two trained dancers performing a hundred rehearsed movement sequences of eleven seconds each … followed by five dancers … and, finally by an onrush of a hundred ordinary folk, each of whom performs one of the eleven-second phrases.  It didn’t matter that the woman in blue jeans collided with one of the real dancers, or that somebody else took a tumble.  It looked as though the unmediated language of dance were taking over the world.”

Since graduating from Barnard College in 1963, Twyla Tharp has choreographed more than one hundred sixty works: one hundred twenty-nine dances, twelve television specials, six Hollywood movies, four full-length ballets, four Broadway shows and two figure skating routines. She received one Tony Award, two Emmy Awards, nineteen honorary doctorates, the Vietnam Veterans of America President’s Award, the 2004 National Medal of the Arts, the 2008 Jerome Robbins Prize, and a 2008 Kennedy Center Honor. Her many grants include the John D. and Catherine T. MacArthur Fellowship. She is a member of the American Academy of Arts and Sciences, the American Philosophical Society and an Honorary Member of the American Academy of Arts and Letters.
In 1992, Ms. Tharp published her autobiography Push Comes to Shove. She went on to write The Creative Habit: Learn it and Use it for Life followed by The Collaborative Habit: Life Lessons for Working Together. She is currently working on a fourth book.

Located in the heart of Beverly Hills, California, the Wallis Annenberg Center for the Performing Arts (“The Wallis”) brings audiences world-class theater, dance and music, performed by many of the world’s most talented and sought-after artists. With eclectic programming that mirrors the diverse landscape of Los Angeles, and its notability as the entertainment capital of the world, The Wallis offers original and revered works from across the U.S. and around the globe. The mission of The Wallis is to be a vital cultural hub that uses unique arts events and education programming to entertain, enlighten and inspire children and adults in our community and across the nation.  Nominated for 12 Ovation Awards, four L.A. Drama Critic’s Circle Awards and the recipient of five architectural awards since opening in 2013, this fall marks The Wallis’ third season, which includes its prestigious Arts & Ideas series, conversations with guests from the realms of culture, literature and politics. Housed in a breathtaking 70,000-square-foot venue designed by Zoltan E. Pali, FAIA of Studio Pali Fekete architects, The Wallis celebrates the classic and the modern. The building features the restored, original 1933 Beverly Hills Post Office (on the National Register of Historic Places) that serves as the theater’s dramatic yet welcoming lobby, and houses the 150-seat Lovelace Studio Theater, GRoW at The Wallis: A Space for Arts Education (a gift of Gregory Annenberg Weingarten and Family and the Annenberg Foundation) and the contemporary 500-seat, state-of-the-art Bram Goldsmith Theater. Together, these structures embrace the city’s history and its future, creating a performing arts destination for L.A.-area visitors and residents alike.  For more information, visit their official site.