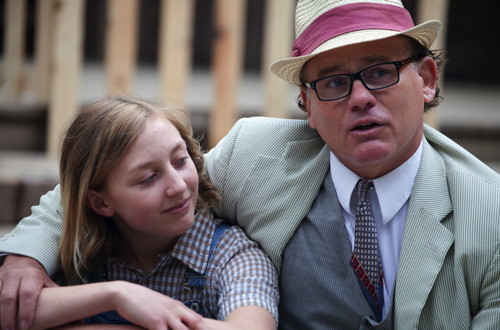 Here is my newest theater review for Stage Raw, the critical theater site.

We recommend this poignant stage rendition of one of American literature’s most beloved novel, To Kill A Mockingbird.

Ellen Geer directs a large ensemble of actors and, together with the design team and crew, the Theatricum Botanicum company delivers an endearing stage version of one of the most beloved novels in American literature. To Kill A Mockingbird is Harper Lee’s poignant and autobiographical tale of one pivotal summer while growing up in a small town in the Deep South during the 1930s. In it Lee examines social mores and the prevalence of racism through the eyes of central character Scout, here exceptionally well played by Lily Andrew. The novel has been beautifully adapted to the stage by Christopher Sergel, with certain adjustments necessary for the medium. An important adjustment is the transference of the narration of the book (Scout aka Jean Louise reminiscing about her childhood) to observations from one of the older spinster neighbors, Miss Maudie (nicely portrayed by Melora Marshall). The story’s various plot points will likely be familiar to most audience members and they flow nicely from one to the next.

The innocence of eight-year old Scout is forever altered when her State lawyer-father Atticus (Richard Tyson) defends a poor black man Tom (Max Lawrence) accused of raping a white woman Mayella (Claire Bryett Andrew). In the events leading up to the drama of the trial, as well as its aftermath, Scout, her older brother Jem (Clint Blakely), and their friend named Dill (Cameron Rose) experience the shocking prejudice ingrained in their small Southern town.

To Kill a Mockingbird

• Adapted for the stage by Christopher Sergel

• Based on the Pulitzer Prize-winning novel by Harper Lee

(midway between Pacific Coast Highway and the Ventura Freeway).

• Children 6 and under: free