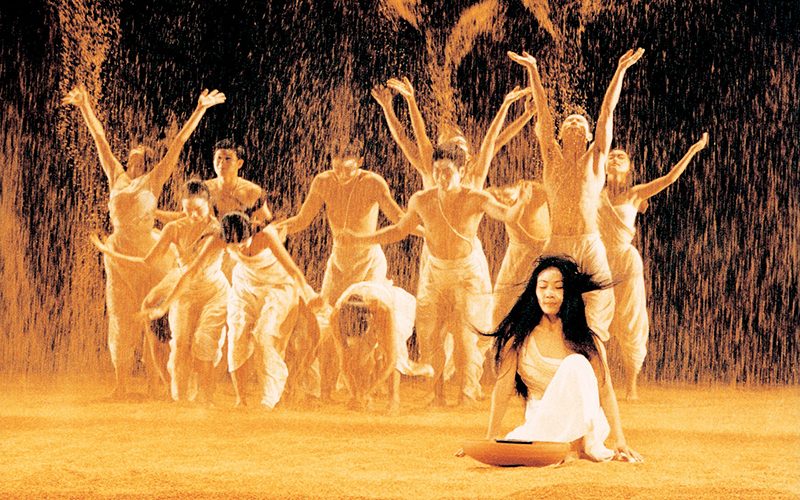 With a performance that gives tribute to the land and to nature, as well as celebrating the 40th anniversary of the company, Cloud Gate Dance Theatre presents Rice — an elemental depiction of the life cycle of rice and humankind through dance.

Hailed as a Music Center first, Glorya Kaufman Presents Dance at The Music Center will host Asia’s most renowned contemporary dance company for their Southern California premiere of Rice at the Dorothy Chandler Pavilion from January 29-31, 2016.

For his rippling, poignant view of seasonal life, Cloud Gate Dance Theatre’s Founder, Artistic Director and choreographer Lin Hwai-min drew inspiration from the Taiwanese rice fields of the Chih Sheng valley, examining the cycles of weather and work that govern them.

Adopting an immersive approach,  Lin Hwai-min took his dancers to the Chihshang village in the East Rift Valley of Taiwan, where they joined the farmers in harvesting the rice and embraced the experience of working in the fields as the foundation for their performance.

In order to completely represent the setting for Rice, a cinematographer spent two years on location capturing the cultivation of rice: flooding, sprouting, harvesting and burning of the field. These video images  of clouds reflected in the water, rice swaying in the wind, and fire ravaging the fields have become the essential visual elements of the production. Ensconced in this environment, the formidable Cloud Gate dancers enact a human drama parallel to the life cycle of rice.

The landscape of the Taiwanese farming village, Chihshang, was tainted by the use of chemical fertilizer, but has now regained its title as the Land of Emperor Rice by adapting organic farming methods. Lin was awed by the immense waves of grain rolling across the expansive fields of rice and moved by the efforts of the environmentally-conscious farmers. He took his dancers to the village where they joined the farmers in harvesting the rice and embraced the experience of working in the fields. His creation includes exuberant, powerful movements that are woven into his story of the land and the contemplation of the destruction of the Earth. To emphasize the messages, the production uses projection of vivid video images of flooding, growth, harvesting and the burning of the fields. The soundtrack mixes Hakka folk songs, using the oldest among the existing Chinese dialects; Western opera; Taiwanese and Japanese drums; and the sounds of nature  the rustling of grain, the rushing of wind, and the pealing of rain and thunder, all recorded on-site.

With dancers trained in meditation, Qigong (an ancient form of breathing exercise), internal martial arts, modern dance and ballet, Cloud Gate Dance Theatre transforms ancient aesthetics into thrilling original performances and a modern celebration of motion. Created by Founder and Artistic Director Lin Hwai-min, who has been heralded as one of the most important choreographers in Asia, Rice is a human drama that calls attention to the need to protect the Earth by portraying the life cycle of rice cultivation  from death to rebirth, devastation and resurrection. Pre-performance DANCETALKS in the Dorothy Chandler Pavilion Stern Grand Hall one hour prior to each performance, along with a short interactive Tai Chi demonstration. DANCETALKS are also available in real time by calling 1-800-371-8200 (access code 314902#) and can be heard after the engagement on The Music Centers Soundcloud channel here.

For more information about the performance, visit The Music Centers blog, OneThirtyFive//Grand, here or here.

About Cloud Gate Dance Theatre of Taiwan:
Founded by choreographer Lin Hwai-min in 1973, Cloud Gate Dance Theatre of Taiwan is the first contemporary dance company in any Chinese speaking community. Cloud Gate is the name of the oldest known dance in China. Cloud Gate has toured extensively with frequent engagements at the Next Wave Festival in New York, the Sadler’s Wells Theatre and Barbican Centre in London, the Moscow Chekhov International Theatre Festival, and the Internationales Tanzfest NRW directed by Pina Bausch. Cloud Gate also enjoys high acclaim and popularity in Taiwan. In addition to the regular seasons in theatres, the Company stages annual free outdoor performances in various cities in Taiwan, drawing audiences of up to 60,000 per performance. To perform for grass roots communities, and to foster young choreographers in Taiwan, Cloud Gate 2 was founded in 1999. In 1998, Cloud Gate Dance School was founded to bring the joy of dance to students, ages four 4 to 84.

About The Music Center:
The Music Center is Los Angeles home to the worlds greatest artistic programs and events. With four iconic theaters and four renowned resident companies  Center Theatre Group, the LA Master Chorale, the LA Opera and the LA Philharmonic  and recognized for its illustrious dance programming, Glorya Kaufman Presents Dance at The Music Center, The Music Center is a destination where audiences find inspiration in the very best of live performance, as well as nationally recognized arts education and participatory arts experiences. For more information, visit http://www.musiccenter.org