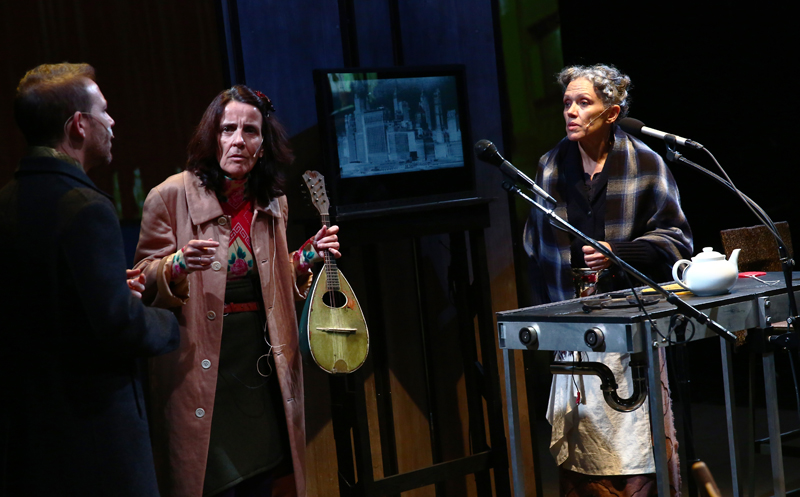 As a voting theater critic (for both the LADCC and Stage Raw) awards here in Los Angeles, it can be a bit of a shock when you’re told you are forbidden to review a show.

Yep, that’s right — the publishers of a play granted the rights to its performance but decided to issue an ban on reviewing.

Okay – just to let you know, under certain circumstances, this does happen sometimes. There are times when a theater company wants to show an unfinished piece to an invited audience. For a “work-in-progress,” naturally I respect their request that I hold off on reviewing.

L.A. theater critics, however, are presently facing a completely different situation. Late last week a press release went out from REDCAT, regarding The Wooster Group’s upcoming production of Harold Pinter’s The Room, alerting us that “…reviews of the production would be forbidden.”

Here’s the language from the press release:

REDCAT and The Wooster Group announce that Samuel French, Inc., which manages the United States rights for Harold Pinter’s work, restricts critics from reviewing the world premiere of the Group’s production of The Room at REDCAT (Roy and Edna Disney/CalArts Theater) February 4 to 14, 2016.
On January 11, 2016, Samuel French instructed the Group that all promotion and reviews of the production would be forbidden. The Group appealed this decision, and Samuel French subsequently lifted the restriction on promoting the production, but informed the Group that the restriction on reviews will remain in place. Samuel French’s licensing agreement states that “There may be absolutely No reviews of this production; e.g. newspaper, website posts etc.” The Group was also informed that they could not currently receive permission for future performances of the production being planned in New York City and Paris.
In an email to the Group, Samuel French Licensing Manager David Kimple did not give a specific reason for the sudden restrictions, only citing “outside circumstances.”

No real reason given, beyond the nebulous “outside circumstances.”

The Wooster Group’s production of Harold Pinter’s The Room is not a “work-in-progress.”

Incidentally, the production that opens this Thursday at REDCAT is not even the “world premier” as a (presumably) early incarnation of the show was staged in NYC last October as a preview, prior to its its Los Angeles debut.

The Wooster Group presented the piece in sold-out advance showings at The Performing Garage, the Group’s home theater in New York City. These performances, which took place October 28 – November 21, were authorized by Samuel French without imposing any limits on press access.

Now the production is opening at REDCAT. Clearly the show is ready for the public viewing and critical appraisal.

Described as a “comedy of menace,” The Room is the renowned British playwright’s first play, written when Pinter was 27 years of age. This production is the first of three Pinter productions the Off-Broadway company is developing, though it remains to be seen if Samuel French grants approval to The Wooster Group.

Following the L.A. debut at REDCAT this month, the show is scheduled to return to New York for Wooster’s next season. But that may not eventuate…

Firstly, this decree reeks of unconstitutional language. Criticism is free speech and cannot, by law, be muted. Right?!?

Secondly, this absurd gag order appears impractical and unenforceable. Neither Samuel French nor the Pinter Estate have any legal right to enforce a gag order against audience members or professional critics. The only thing they can do is deny performance rights for future productions.

“The American Theatre Critics Association strongly reaffirms our bedrock tenet that arts criticism is journalism,” stated Wm. F. Hirschman, chair, ATCA executive committee.
“Therefore, the decision to review a production to which the public is invited with admission charged is at the discretion and judgment of journalists and their editors.”

But there is a timeline to consider.

According to reporting in the L.A. Times, REDCAT advertised the L.A. production in August 2015, but Wooster/REDCAT didn’t ask for the rights until Oct 2015.

Future performances of The Room in New York and Paris appear to be in jeopardy after The Wooster Group failed to obtain the necessary permission from Samuel French, the licensing company.

Officials at REDCAT said in a release this week that Samuel French instructed the New York-based Wooster Group that all promotion and reviews of the production would be forbidden.

The Wooster Group subsequently appealed this decision, and Samuel French later lifted the restriction on promoting the production, but told the theater company that the blackout on reviews will remain in place.

As reported by David Ng in the L.A.Times:
A London representative for the Pinter estate said via email that The Wooster Group’s application came to Samuel French after the theater company had already announced its production plans.

“The fact is that it was very late in the day last year when we heard they were planning to present the play in Los Angeles and unfortunately, the rights were not available when they applied for them,” said Judy Daish, the representative for the writer’s estate.

“We proceeded with allowing the production with limitations out of courtesy to them.”

Both The Wooster Group and REDCAT disputed her assertion about the timing of the application.

They said that The Wooster Group first applied and received approval for the license for the New York run in July 2014, when it was applying for funding.

They said The Wooster Group followed up by email on Dec. 9 because it hadn’t received a licensing agreement yet, and were told on Dec. 20 that final confirmation would be received soon.

Basically it boils down to this:

Wooster had the rights for the “preview” they staged in NYC last Oct. They applied for and received those rights in July, so there was no ban on the NYC performances. Word around the traps is that Wooster actually had not obtained the rights for the L.A. production before it was announced last Aug.

Wooster apparently only applied for the rights to stage it in L.A. in October, just before the NYC preview season. The Pinter Estate apparently wanted to deny the rights for L.A., but since Wooster/REDCAT had already promoted it, they felt  limited the scope of it.

At present, Wooster currently does not have rights to mount the full production in NY or Paris.

Wooster maintains theirs wasn’t a last minute request for rights, but they don’t dispute that they made the request in Oct while the first advertisements for the L.A. production went out in Aug. It’s possible this was REDCAT’s error. Maybe REDCAT didn’t realize that the rights hadn’t actually been secured when they announced their season. The estate could have shut the whole production down, but they didn’t.

Imposing ridiculous restrictions not only sounds petty and punitive but pointless.

So, dear readers, I will be attending opening night and I will most likely post a review on Friday. Stay tuned!

Produced in 1957, Harold Pinter’s The Room is the first play by one of the most important playwrights of a generation. Directed by Elizabeth LeCompte, this theatrical experience builds on the Group’s goal to create “a theater that encompasses all forms of the arts and has an architecture that isn’t located in a naturalistic place: a theater which integrates music, dance and text into the final art form without privileging one over the other.” They approach Pinter’s 1957 play through a range of comedic forms, including American vaudeville and comic routines (duos like Abbott and Costello or the Smothers Brothers), and the ancient form “cross talk” or xiansheng, a two-person comedy style popular in China since the Qing Dynasty.