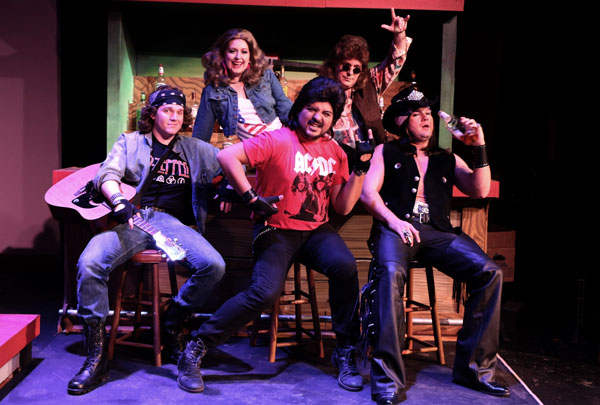 “Rock of Ages” at the Woodlawn Theatre

The Woodlawn kicks off its 2016 season with a rocking, rollicking production of the Tony-nominated Broadway musical.

Anyone who saw the lackluster film version of Rock of Ages should not be deterred from seeing it in its proper environment — live onstage, where the music and raunchy humor can flow free. Christopher Rodriguez’ production, now playing at the Woodlawn Theatre, takes Poison’s lyrics, “Don’t need nothin’ but a good time,” to heart — and it makes for a fun show.

At the tail end of the self-indulgent 1980s, Drew (Brian Hodges) works as a barback at the Bourbon Room on the Sunset Strip but has dreams of rock stardom. There, he meets Sherrie (Amanda Golden), an aspiring actress fresh from Kansas, and gets her a waitressing job at the club. But the Bourbon  is under threat of demolition — along with the rest of the Strip — at the hands of German developers, Hertz Klinemann (Bobby Wood) and his son, Franz (Alonzo Corona). While outraged city planner Regina (Kass Ortiz) protests their scheme, the Bourbon’s owner, Dennis Dupree (David Blazer), plans to bring it back to its former glory by booking the farewell concert of heavy metal band Arsenal, fronted by swaggering rockstar Stacee Jaxx (Anthony Cortino), who got his start there. The paths to love and stardom are fraught with obstacles, however, and Rock of Ages becomes a cautionary tale that rocks to a “top hits of the ’80s” score.

Filled with comic asides and amusing narration by Dupree’s assistant, Lonny (the delightful Isidro Medina), Rock of Ages frequently breaks the fourth wall as he addresses the audience and reminds others that they are performers in a show.

The casting here is well-done. Hodges and Golden display authentic chemistry as the star-crossed lovers; Cortino is hilarious as the thick-as-a-brick Stacee, and Blazer does well as the fretting Dupree. Corona is amusing as the mincing Franz, whose ultimate protest, “I’m not gay — I’m German!” is a riot. Morgan Clyde brings a welcome soulfulness to Justice Charlier, a strip club owner with a heart of gold, and Ortiz is also fine as the earth-shoe-wearing Berkeley hippie Regina (pronounced ‘reg-EYE-na,’ she reminds us).

Benjamin Grabill provides an attractive set that captures the look of a Sunset Strip club, and Rose Kennedy’s costumes are on point. Andrew Hendley’s onstage band sounds great, and the ensemble, well-choreographed by Rodriguez, also shines.