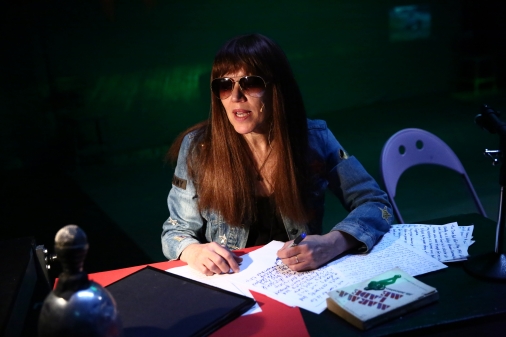 “The Town Hall Affair” The Wooster Group at REDCAT

Opening tomorrow night, The Wooster Group’s newest work The Town Hall Affair delves into the revolutionary fervor of feminist thinking and art “happenings” of 1970s New York. The piece is based on the Chris Hegedus and D.A. Pennebaker film Town Bloody Hall, a documentary of a 1971 panel that featured feminist thinkers and activists— including Germaine Greer, Jill Johnston, and Diana Trilling — with Norman Mailer serving as an immoderate moderator.

During the stage show, special focus is given to radical lesbian Jill Johnston, who attempted to subvert the event.

In The Town Hall Affair, the Group both re-inhabits the original film and derails it, redirecting Mailer’s pugnacious propensities onto himself and spinning out into Jill Johnston’s vision of a radical future.

Directed by Elizabeth LeCompte.
Based on the film Town Bloody Hall by Chris Hegedus and D.A. Pennebaker

The Town Hall Affair is supported by piece by piece productions and the National Endowment for the Arts Art Works program.

About The Wooster Group:

ABOUT REDCAT | THE ROY AND EDNA DISNEY/CALARTS THEATER

REDCAT, CalArts’ downtown center for contemporary arts, presents a dynamic and international mix of innovative visual, performing and media arts year round. Located inside the iconic Walt Disney Concert Hall complex in downtown Los Angeles, REDCAT houses a theater, a gallery space and a lounge. Through performances, exhibitions, screenings, and literary events, REDCAT introduces diverse audiences, including students and artists, to the most influential developments in the arts from around the world, and gives artists in this region the creative support they need to achieve national and international stature. REDCAT continues the tradition of the California Institute of the Arts, its parent organization, by encouraging experimentation, discovery and lively civic discourse.

For current program and exhibition information call 213-237-2800 or visit www.redcat.org.