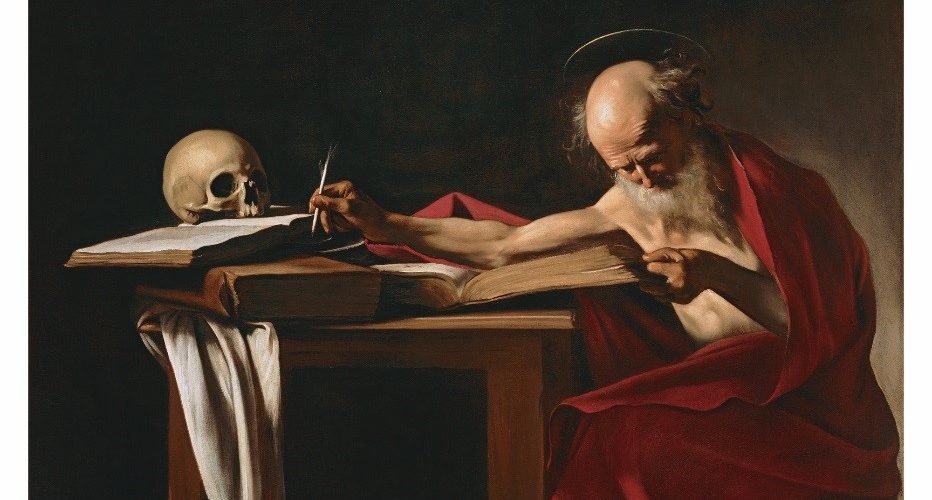 The power and passion of a great artist is undeniable. The subjects of legendary Italian artist Michelangelo Merisi, better known as Caravaggio (1571—1610),  virtually leap from the canvas! His works feature a bold and unusually naturalistic style, which emphasized the common humanity of the protagonists in his works. The artist is especially known for his dramatic use of chiaroscuro. Artists known for developing the technique include Leonardo da Vinci, Caravaggio, and Rembrandt. It is also a mainstay of black and white and low-key photography.

Chiaroscuro is an artistic technique, developed during the Renaissance, that uses strong tonal contrasts between light and dark to model three-dimensional forms, often to dramatic effect. The underlying principle is that solidity of form is best achieved by the light falling against it.

In his day, Caravaggio was both highly admired and highly controversial among his contemporaries.

The Galleria Borghese in Rome houses six paintings by Caravaggio, the largest gathering of his works in a single collection. This exhibition offers a rare opportunity to experience three masterpieces from this renowned museum, and to gain insight into three crucial stages in Caravaggio’s short but intense career.

According to Timothy Potts, director of the J. Paul Getty Museum, “These three masterpieces are among Caravaggio’s best-known paintings, and we are extremely grateful to the Galleria Borghese for sharing them with our public. Caravaggio’s revolutionary genius made him one of the most important and beloved figures in European art history. The opportunity to see three of his most renowned works alongside the exceptional 17th-century Italian masterpieces in our own collection is an event not to be missed.”

One of the most admired painters in history, Caravaggio developed a boldly naturalistic style that employed striking theatrical compositions and emphasized the common humanity of his protagonists. His art was both widely celebrated and highly controversial among his contemporaries and remained influential for centuries afterward.

The three paintings presented in the exhibition exemplify the crucial stages in Caravaggio’s short but intense career (he died at age 39).

Boy with a Basket of Fruit (ca. 1593-94) represents the beginning of the artist’s career when he moved from Lombardy to Rome and first attracted attention as a painter of realistic genre scenes and still lifes. Saint Jerome (ca. 1605) portrays the saint as a scholar reading and annotating sacred passages in the dramatically spotlight manner that Caravaggio made famous. In David with the Head of Goliath (ca. 1610), painted at the end of the artist’s career in his more somber and expressive later style, Caravaggio included his own features in Goliath’s head, purportedly in penance for his having committed a murder in May 1606. All three paintings were acquired by Cardinal Scipione Borghese, a nephew of Pope Paul V, who knew Caravaggio personally and was one of his primary patrons.

“Caravaggio continues to exert tremendous influence on art today. His exceptional combination of truth to life and drama, and that famous chiaroscuro, gave birth not only to a new style of painting, but also inspired generations of painters with his psychological naturalism,” said Davide Gasparotto, senior curator of paintings at the Getty Museum. “These rare loans are prime examples of Caravaggio’s exceptional talent and innovation.”

The exhibition at the Getty Museum is the first part of an international exhibition program on Caravaggio aimed at promoting the Caravaggio Research Institute, an international research project on the artist, conceived by Anna Coliva, director of the Galleria Borghese and supported by the Roman House FENDI through a three-year partnership with the Roman museum.

The partnership between the Galleria Borghese and FENDI is part of a patronage begun by the luxury goods House in 2015, and is based on the company’s belief that beauty must be shared and spread, and that the incomparable richness of the Galleria Borghese, a reflection of the Eternal City, is a powerful, cosmopolitan pathway to promote a refined cultural sensitivity, both contemporary and universal, in the same way that FENDI pursues in its collections a true example of aesthetic research and the absolute sign of “Made in Italy.”

“The Caravaggio Research Institute is an international scientific project that seeks to reintroduce within museums the most advanced research to make them producers of culture and not mere producers of blockbuster exhibitions. The Galleria Borghese and FENDI are honored that the Caravaggio Research Institute will be presented to the public at the Getty, a leading actor in preserving, researching, promoting and enhancing art and a leading authority in the realm of digital humanities,” says Anna Coliva, director of the Galleria Borghese.

“We are proud to support the Galleria Borghese and the Caravaggio Research Institute through this unique exhibition opportunity at the Getty Museum. It is increasingly a fundamental value, as well as a moral one, for FENDI to enhance, support and export Italian art and beauty in the world, its excellence and its talents,” states Pietro Beccari, Chairman and CEO of FENDI.

Caravaggio: Masterpieces from the Galleria Borghese

On view at the Getty Center.

This exhibition inaugurates the Caravaggio Research Institute, an international research institute conceived by Anna Coliva, Director of the Galleria Borghese, and supported by the Roman luxury House FENDI.