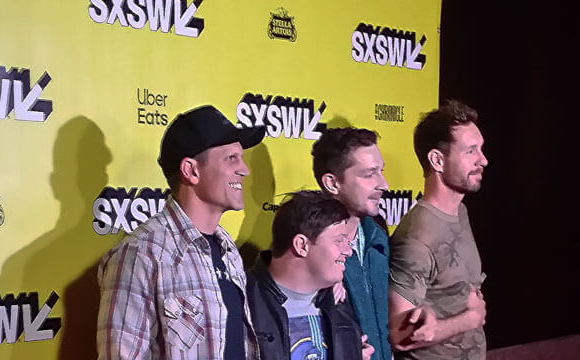 In The Peanut Butter Falcon, newcomer Zack Gottsagen stars as a 22-year-old with Down syndrome who lives in a retirement home — the only place the state could find for him after his parents left. Endlessly watching an old VHS of his wrestling idol, the Salt Water Redneck, he dreams of making his way to Florida to the wrestling school that’s advertised on the video. With the help of other residents, he manages to makes his escape.

Meanwhile, Tyler (Shia LaBeouf), a fisherman with troubles of his own, is fleeing Duncan (John Hawkes), a ruthless crab trapper whose equipment he had destroyed in a fit of rage.

Tyler discovers an unexpected passenger aboard his boat — Zak, who has concealed himself under a tarp to elude bullies.

At first Tyler is inclined to go his own way, but Zak’s persistence wins him over. Needing to put some miles between himself and the furious Duncan anyhow, he commits himself to making sure that his new friend gets to the school.

With The Peanut Butter Falcon, writer/directors Tyler Nilson and Mike Schwartz have done a marvelous job putting their unique spin on what could have been just another Huck Finn-style adventure story. And for an indie project such as this, they’ve managed to attract an impressive name cast. Along with LaBeouf, the film features John Hawkes, Bruce Dern, Dakota Johnson, John Bernthal and Thomas Haden Church.

Dern has a quick but fun cameo as one of the nursing home residents who helps Zak get out. Bernthal appears in poignant, wordless flashbacks as Tyler’s brother, Mark, whose tragic death is the reason for Tyler’s guilt and anger. As Duncan, Hawkes portrays another of the simmeringly dangerous characters he’s so good at.

Johnson projects a natural warmth as Eleanor, Zak’s caregiver from the home who’d been sent on the road to find her charge — and ends up joining the boys on their mission. Church’s Clint (the Salt Water Redneck) is both hilarious and moving, a faded celebrity who revels in the fact he’s still being idolized by someone.

But it’s Gottsagen and LaBeouf who truly anchor the film. Their chemistry is so authentic and charming that it smooths over any potential rough patches. And there really aren’t any, thanks to Nilson and Schwartz’s deeply-felt screenplay.

It’s beautifully shot by DP Nigel Bluck, whose restless camera makes the most of the beautiful Georgia locations. The score, supervised by Zachary Dawes and composed by Noam Pikelny, Jonathan Sadoff and Gabe Witcher, provides a rich accompaniment for Bluck’s visuals.

The Peanut Butter Falcon was reviewed at SXSW Mar. 10, 2019 at the Austin Convention Center in Austin TX.