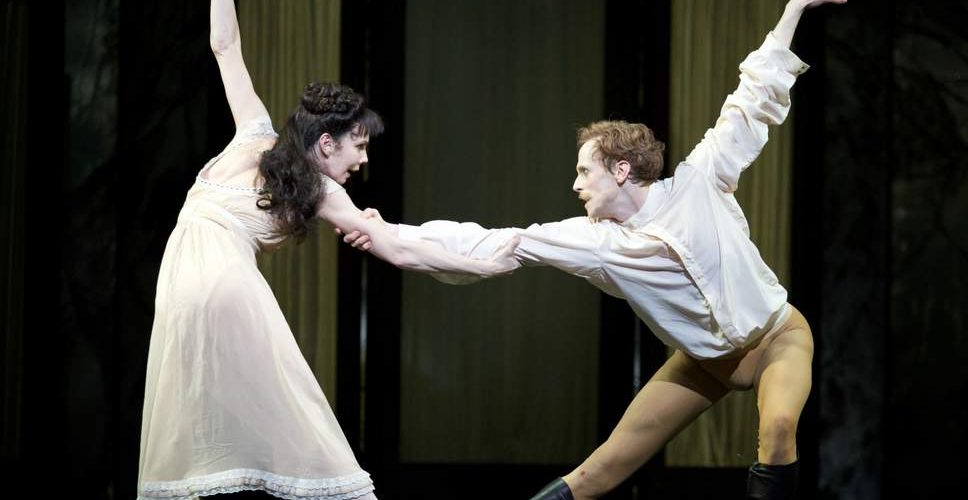 The Music Center presents The Royal Ballet in June

Great Britain’s most prestigious ballet company The Royal Ballet returns to The Music Center with Kenneth MacMillan’s Mayerling, a tale of dangerous desires, family secrets and political intrigue. Based on the true story of the deaths in 1889 of Austro-Hungarian Crown Prince Rudolf and his teenage mistress Mary Vetsera, and set in the brilliant backdrop of the Viennese palace, Mayerling brings to life the vividly absorbing incident that shook the royal courts of the 19th century. This dark and intense ballet with live orchestra was first created for The Royal Ballet by Kenneth MacMillan in 1978 and is regarded by many as among MacMillan’s finest works.

The following weekend, July 12–13, 2019, the company will also perform as part of Adès & McGregor: A Dance Collaboration, a major partnership between the LA Phil and Glorya Kaufman Presents Dance at The Music Center combining the creative talents of Grammy® Award-winning composer-conductor Thomas Adès and multi award-winning British choreographer Wayne McGregor. The Royal Ballet, as well as Company Wayne McGregor, will dance in Adès & McGregor, an evening of three works including two dance world premieres with performances by the LA Phil under the baton of Adès.

The Royal Ballet will debut the staged world premiere of The Dante Project (Inferno), a new work created for them by McGregor, the Royal’s resident choreographer and modern dance innovator. Inspired by Dante’s Divine Comedy and set to Adès’ Inferno, the new work features set and costumes designed by visual artist Tacita Dean.

The Royal Ballet’s Mayerling depicts the drama of dangerous desires, family secrets and political intrigue. The production is based on the true story of the 1889 deaths of the Austro-Hungarian Crown Prince and his teenage mistress. Multi award-winning principal dancers for these performances include Ryoichi Hirano, Matthew Ball, and Thiago Soares as Prince Rudolf, and Natalia Osipova, Sarah Lamb and Lauren Cuthbertson as Mary Vetsera with Francesca Hayward as Princess Stephanie.*

Set in the brilliant backdrop of the Viennese palace and the Mayerling hunting lodge, the performance brings to life the incident that shook the royal courts of the 19th century with a fatal attraction and the mysterious deaths of Crown Prince Rudolf and Baroness Mary Vetsera. The two gunshots that rang out at Mayerling in the Vienna Woods still echo in Kenneth’s MacMillan’s vivid dramatization today. Sex, death, the misfit and the pas de deux are hallmarks of MacMillan’s choreography, balancing classical tradition and innovation.

Choreographed in 1978, Mayerling features one of the most demanding, complex male roles in the ballet repertory. Rudolf dances seven duets among the women in his life that express heightened emotion and the source of his despair from the mutual misunderstanding between he and his mother, Empress Elisabeth, to the brutality of his wedding night with Princess Stephanie, and from the unbridled physicality and lust in his first encounter with Vetsera to their tortured final duet. MacMillan’s large-scale crowd and court scenes also present the entire company at its dramatic finest. The ensemble scenes at court that force Rudolf to “behave” crackle with the tension between what he must do and his own wish not to do it.

Featuring the famous Bedroom pas de deux, Mayerling explores the darkest reaches of the human experience of seduction and obsession within the privileges of royal life. Rudolf’s dissipated decline is set brilliantly against the crumbling, oppressive Austro-Hungarian court, a tragedy of both personal and political proportions. The Music Center presentation of Mayerling will be accompanied by live orchestra performing music by Franz Liszt. “A sumptuous production” (The Spectator), Mayerling‘s running time is approximately three hours, including two intermissions, and runs for three performances (July 5–7, 2019) at The Music Center’s Dorothy Chandler Pavilion.

One hour prior to each performance of Mayerling, The Music Center will host DANCETALKS led by dance historian and author Elizabeth Kaye. Ticketed guests can join this fascinating behind-the-scenes pre-performance discussion.

As part of its commitment to deepening the cultural lives of Angelenos, The Music Center will integrate a number of the dance engagements with free arts education programs in conjunction with The Royal Ballet. On July 5, 2019, a select number of high school dance students will attend a masterclass and work with a member of the ballet staff from The Royal Ballet. The dance students will be instructed on technique and then learn a variation from Mayerling. That afternoon, they will have the opportunity to watch an open rehearsal, along with other students from local dance schools. From July 8–12, 2019, Royal Ballet teaching artists will work with Los Angeles-based Straight Up Abilities, which provide dance opportunities to children and adults with intellectual or physical disabilities. Participants will engage in a week-long residency with The Royal Ballet at The Music Center, exploring themes from Wayne McGregor’s new ballet, Inferno, culminating in a public sharing on Friday morning.

The Royal Ballet also performs July 12–13, 2019, during Adès & McGregor: A Dance Collaboration, an extraordinary meld of music and dance world premieres. Composer-conductor Thomas Adès conducts the LA Phil, “the most significant and successful major orchestra anywhere” (Los Angeles Times), with its first return performance to The Music Center’s Dorothy Chandler Pavilion, its original Music Center home, for an evening of the maestro’s work. The LA Phil is celebrating its centennial year this season.

Set to Adès’ new score Inferno, with set and costume designs by Dean, The Dante Project (Inferno) is an epic journey through the afterlife performed by The Royal Ballet. The creative team for this work also includes lighting design by Lucy Carter and Simon Bennison and dramaturgy by Uzma Hameed. Inferno is the first act of this new ballet premiering in Los Angeles during this engagement. In May 2020, The Royal Ballet will present the full three-act ballet as a complete work at the Royal Opera House in London. The Music Center program will also feature a second dance world premiere of McGregor’s work danced by Company Wayne McGregor as well as the West Coast premiere of Outlier performed by both Company Wayne McGregor and dancers from The Royal Ballet.

Created in partnership with Glorya Kaufman Presents Dance at The Music Center, the LA Phil and Company Wayne McGregor and The Royal Ballet, tickets for Adès & McGregor: A Dance Collaboration performances at The Music Center start at $34 and are available online at https://www.musiccenter.org/adesmcgregor; at the Dorothy Chandler Pavilion Box Office, 135 N. Grand Ave, Los Angeles, CA 90012; or by calling (213) 972-0711. For groups of 10 or more, call (213) 972-8555 or email [email protected].

*Programs and artists subject to change.

About The Royal Ballet:
Under the directorship of Kevin O’Hare, The Royal Ballet unites tradition and innovation in world-class performances, and is a driving force in the development of ballet as an art form. Based at the Royal Opera House, Covent Garden, it brings together today’s most dynamic and versatile dancers with a world-class orchestra and leading choreographers, composers, conductors, directors and creative teams to share awe-inspiring theatrical experiences with diverse audiences worldwide. The Company’s extensive repertory embraces 19th-century classics, the singular legacy of works by Founder Choreographer Frederick Ashton and Principal Choreographer Kenneth MacMillan and the compelling new canon of work including pieces by Resident Choreographer Wayne McGregor, Artistic Associate Christopher Wheeldon and Artist in Residence Liam Scarlett.