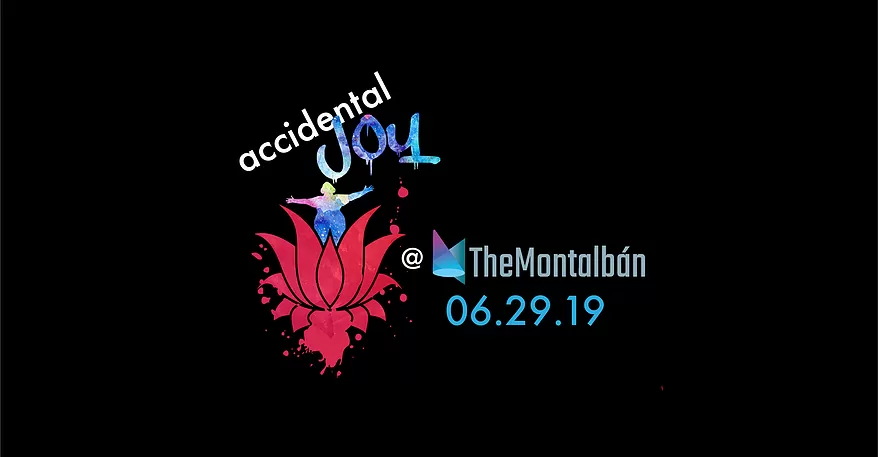 Accidental Joy: A New Musical at The Montalbán

Accidental Joy: A New Musical (a workshop production) is coming to The Montalbán for a one-night-only engagement on Saturday, June 29.

With a book by Marcus Terrell Smith, music by Robbie McDonald, and lyrics by both, Accidental Joy is a dark comedy musical about one woman’s incredible journey to find the guru within, and the four or five hilarious murders that follow her along the way.

This year, The Montalbán, a theatre building a reputation as an early champion of new productions—helping to nurture shows for eventual tours and Broadway-bound engagements—became a fan and supportive friend. Together with the show’s producers, Linda Joe and Marcus Terrell Smith, they are deviating from the standard theater development process. For one thing, presentations of new shows are usually done for small focus groups but Accidental Joy is changing the trend and inviting 1,000 theater goers to have direct involvement in the development of this unique show, which will employ minimal sets and costumes for this workshop production on the 29th.

Synopsis: Fame, wealth, and love have constantly eluded Joy ever since childhood. A down-on-her-luck, overweight, middle-aged housewife, she has resigned herself to a life of regret and unfulfilled potential. But when Niev Lapel comes to town — a spiritual healer made famous when she received supernatural powers from aliens in the woods — Joy is determined to take one final stab at getting what she deserves.

Laden with adult language and situations, catchy original songs, and four or five murders, Accidental Joy: A New Musical, is a third-eye opening dark comedy that speaks to the central role we play in forging our own destinies.
“Accidental Joy was written as a singer’s musical,” explains writer and co-lyricist Smith, “where each song, though it propels the story forward, can stand alone. We really wanted to write something a musical theatre actor could really sink their teeth into and perform. We found an awe-inspiring array of amazing teammates to realize this such as actor Tyren Perry(Bustin’ Loose, Family Matters) and orchestrator/arranger Anthony Sabatino, along with a stellar band. Come one, come all, and be enlightened!”

Accidental Joy: A New Musical bloomed out of a fateful meeting between Smith and McDonald one night outside of an empty Los Angeles bar. Producer Linda Joe joined the dynamic team right after its sold-out “first look” event in April 2018. Since then, the trio has worked tirelessly to bring Accidental Joy’s message of self-confidence and a belief in one’s self to life. This new musical is coming into its own with a glowing endorsement from the prestigious La Jolla Playhouse, it was an Official Selection at the 2018 New York Musical Festival and enjoyed a sold-out staged reading event at the Belasco Theater in Downtown Los Angeles last October.

As Joy Perkins likes to say, “You can’t go half-ass on fate. She needs both cheeks to sit on.”

For tickets and more on this production, please call the box office at 323-461-6999 or visit the official site.

ABOUT:
Tyren Perry (Joy Perkins) –An Illinois native, Tyren Perry moved to California with her family at the age of eleven with dreams of singing and acting. She would soon find herself singing on The Real Ghostbusters cartoon soundtrack, which caught the attention of music producers, leading to a recording contract with Columbia Records and a solo album titled, Don’t Rush It. At the same time, she would become a seasoned child actress in Bustin’ Loose and such TV sitcom favorites as Diff’rent Strokes and Family Matters. Years later, Perry would team up with her sisters on Twism/Interscope Records in a group called S.H.E. releasing their aptly titled debut, 3’s A Charm. To this day, music and acting are a big part of Perry’s life, and she remains active on various film and musical projects.
John Shartzer (Ned Perkins) –John Shartzer’s recent theater credits include Max in Lend Me A Tenor and Paul the Human in the workshop of Darling Grenadine, at the Eugene O’Neill Theatre. Since 2017, Shartzer has played Ryan in season three of Hulu’s Casual, Frankie in Subway’s “Italian Hero” campaign, Andrew in the feature film The Book Club with Candice Bergen, and he made his network debut in the pilot episode of Ghosted on Fox. He’s back, this year, for an appearance on Brooklyn 99.

Jules Sanchez (Jon) – Jules Sanchez began his theatre career playing the role of “Lamar” in the San Francisco Bay Area Critics Choice Award-winning production of Godspell at Center Rep Theater Co. Sanchez would go on to co-star with Broadway, TV and Film Veteran, Clifton Davis, in Tell Hell I Ain’t Coming at the World Famous Chicago Theatre. Sanchez landed the role of “Big Will” in the Hip Hop Gospel play Uncle Willy’s Family performing alongside hip hop mogul and Dancing with the Stars’ Master P and Romeo. Sanchez recently performed in the staged reading of Church, a Spirited Revival, produced by and starring Emmy award-winning Leslie Jordan (Will and Grace), and Sally Struthers (All in the Family).

Marcus Terrell Smith (Book & Lyrics) – Marcus Terrell Smith graduated from the University of Arizona, studying musical theater and receiving his B.A. in Linguistics. He was accepted into the Actors Studio Drama School at Pace University (ASDS), and graduated with a Masters of Fine Arts in Acting. In May 2014 he joined the national tour of Broadway’s The Book of Mormon (Mutumbo). After a two and a half year run with the production he moved to Los Angeles, where he continues to act in film and television, in such shows as Netflix’s Little Evil, Grey’s Anatomy and NCIS, and in theater. He is currently starring in Ragtime at the Serenbe Playhouse in Atlanta, Georgia as Coalhouse Walker Jr. Writing has always held a special place in his heart, and he has enjoyed success with his novel series, Cry The Fables, several television projects, and Accidental Joy: A New Musical.

Robbie McDonald (Music & Lyrics) – With nods to Damien Rice, Hedwig, Sondheim and Black Sabbath, singer-songwriter Robbie McDonald pens torchy pop gems on piano, guitar, banjo and ukulele. A Los Angeles native, McDonald cut his teeth in indie rock bands on the Sunset Strip but his years spent in Ireland defined him as a songwriter with his critically acclaimed album Mighty Quiet. Since returning to the states, McDonald has worn hats as club promoter (Fabaret!, Party of Four), talent booker, chat show host (Afternoon Delight), actor (Othello at ZJU, Frida at TU) and journalist. McDonald’s a regular on LA’s performance circuit at such venues as The Broome Room, Planet Queer, GayDD, The Montalbán, Highways and the Hotel Café. For updates and releases please visit www.robbiemcdonald.com.