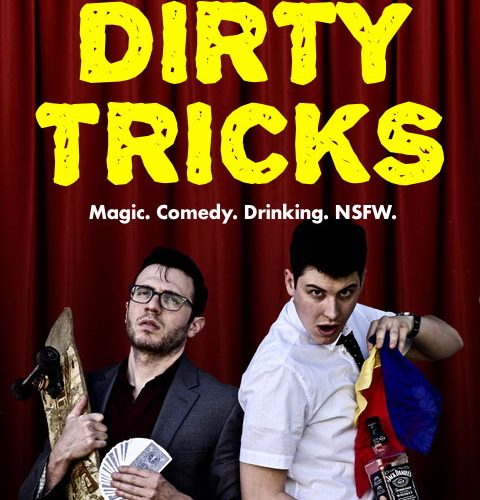 The New Bad Boys of Magic are Daniel Donohue and Eric Siegel, a pair of magicians who are currently hosting a variety show called Dirty Tricks one Sunday per month at the Three Clubs cocktail lounge / dive bar / venue in Hollywood.

Their next show is coming up this weekend, Sunday August 18th at 8PM.

Their show opens with the guys casually bantering back and forth while they disrobe, until they each suddenly (and magically) produce a full glass of soda from their coat sleeves. Impressive!

The guys banter with the audience (and with each other) and press-gang volunteers to do shots with them as well as participate in their magic stunts — even coughing up someone’s selected card at one point in the act!

The guys act as MCs for the variety show, introducing several performers throughout the brisk one-act, 75-minute show that never out-stays its welcome.

One performer I saw was Simon Cornell who managed to fool Penn & Teller on their “Fool Us” TV show. This magician does amazing feats with a Pringles can and a Rubik’s Cube, magically solving the cube before our eyes.

The second guest was Madelaine Wagner who teaches us (ironically) how to make crafts on a budget, even going around collecting trash from the pockets of audience members. Dressed in a fright wig and a pinafore covered with “flair,” her hilarious stage persona is reminiscent of the Kristen Wiig “Target lady” character from Saturday Night Live with shades of Lily Tomlin.

Then there’s more comedy nonsense from our hosts/MCs enlisting audience participation with a “Marry/Fuck/Kill” game using photos of celebrities.

The final guest performer was named Michael — a loud, middle-aged dude who does a deft balancing act and a “cheeseburger escape act” that has to be seen to be believed!

Plenty of fun is to be had with these two gifted magicians and their roster of talented guests.

The next DIRTY TRICKS show is scheduled for Sunday, August 19, 2019. Shows start at 8PM and run for about 75 minutes, no intermission.