The 2017 Fringe award-winner returns with a topical new show.

Returning to this year’s Fringe after his 2017 Producer’s Encore! Award-winning Desert Warrior: A Benghazi Story is writer/performer Ross John Gosla. He is premiering his new solo show, Sexual Misadventures of a Straight White Male: A Privilege Story.

Ross spoke with ArtsBeat LA about the new piece and what he’s been involved with since we saw him last.

ArtsBeat LA: What have you been up to since the 2017 Fringe?

Ross John Gosla: Wow, hard to believe it’s been two years. Been keeping busy. I did a short run of Desert Warrior in January 2018, followed by a couple of one-off plays. I was brought on staff full-time at the Complex Hollywood, where Monica Martin and team have been working at full speed to improve and renovate since she took over ownership last year.

I filmed an episode of the web series The Wasteland,in which I played a captured insurgent in a dystopian future. I shot a big commercial at the beginning of this year directed by an Academy Award-winner (NDA). Most recently, I provided the narration for the documentary Masculinity that Inspires Change that dropped on Amazon Prime this past May.

ABLA: Tell us a bit about the new piece. What was the inspiration?

RJG: The piece follows a privileged straight white male named “Ross” as he goes on an adventure through the Man Make Machine in order to become a real man in 2019. When the Weinstein scandal broke, I found myself quickly saying, “But I’m not like that,” as I’m sure many men did. And we men tended to vocalize that sentiment loudly.

But as the narrative evolved, a resounding female voice said: “Shut up and let this play out.” And as it did, the moment of epiphany came. I asked myself if there were any areas of sexual violation that I have committed, any lines crossed, any boundaries not respected. And in that introspection, I found a myriad of unchecked behavior — behavior that in a different set of life circumstances could very well lead to a Weinstein-esque persona.

From there, I applied the same formula I used with Desert Warrior. I took that behavior I revealed and a couple other seemingly unrelated events (my Taekwondo years, and a couple of key conversations with my Dad), put them into the brain mixer, and here we are!

ABLA: Your director, Steph Martinez, is a Fringe first-timer. What’s her background?

RJG: She is a blessing from Heaven. We met at the theater program at Arizona State in 2007. A similar training style — the program primarily utilizes Viewpoints as a tool to train actors and devise new work. We reconnected here in LA and are part of the same acting studio, Studio 24/7. A brilliant actress and artist, she has masterfully shaped the piece and kept me truthful in the work with insightful notes and questions. Most importantly, she has brought a perspective that is crucial to any conversation dealing with improving gender relations.

ABLA: What message do you hope to deliver with this piece?

RJG: Understanding and healing. I believe there are certain unifying male experiences that all men share. I’d like to think that if the show causes one other man to honestly examine his “gray areas,” and he comes to recognize those times when he may not have actually had consent. Or he was false with his intentions, and learns from those mistakes and can foster a higher ideal in the future, that would be a powerful message indeed.

ABLA: How does it feel to be back at the Fringe as a performer?

RJG: I love the Fringe, it’s my absolute favorite time of the year. You meet so many like-minded artists and make so many new friends. The electricity in the air is palpable — this year especially. All the participants seem extra pumped!

ABLA: What words of advice would you give to Fringe neophytes?

RJG: Dive in headfirst, have fun, hydrate, rest when needed; rinse and repeat.

ABLA: What other shows playing this year sound intriguing to you?

Meet Me in Mizzery

Sexual Misadventures of a Straight White Male: A Privilege Story plays June 14-29 at the Complex Hollywood’s Flight Theatre, 6472 Santa Monica Blvd. Specific dates and showtimes, as well as ticketing information, can be found on the Fringe site.

Feature photo: Gosla at the 2017 Fringe. 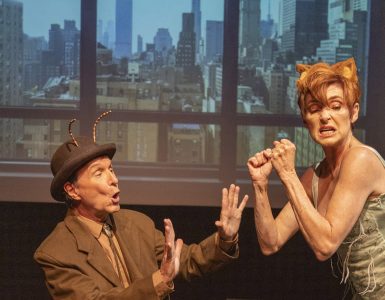 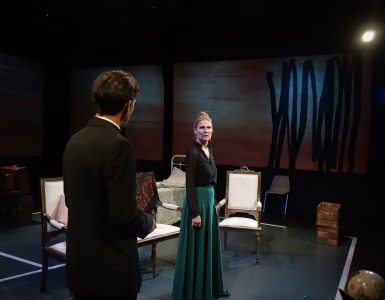