Rooted in a place where ancient Irish mythology and modern Ireland meet, Swan Lake/Loch na hEala is a Swan Lake for our time. Dance is interwoven with storytelling, song and live music performed by a company of thirteen world-class performers. The Dublin-based band Slow Moving Clouds has created a new score that combines Nordic and Irish traditional music with minimalist and experimental influences.

From the imagination of one of Ireland’s foremost dance and theatre makers comes a new adaptation of one of the most famous of all story ballets, Swan Lake. Michael Keegan-Dolan has forged a searing new vision for this beloved tale, creating a world of magical realism, compelling imagery and potent storytelling.

A critical smash in Dublin and at Sadler’s Wells, winner of best production and best costume design at the Irish Times Theatre Awards 2017, this Swan Lake is rooted in a place where ancient Irish mythology and modern Ireland collide. The Dublin based band Slow Moving Clouds has created a new score that combines Nordic and Irish traditional music with minimalist and experimental influences. The result is a Swan Lake for our time and a stunning debut for Keegan-Dolan’s new company, Teaċ Daṁsa.

Swan Lake/Loch na hEala by Irish writer, director and choreographer Michael Keegan-Dolan, is a unique and transcending interpretation of one of the most famous classical ballets. This contemporary collision of dance, theatre and live music (by Dublin-based band Slow Moving Clouds) is known to infuse its viewers with a raw, majestic and empowering energy, rooted in the meeting of ancient folklore and the modern world.

Presented with support by Culture Ireland.

Michael Keegan-Dolan founded Teaċ Daṁsa (pronounced Chak Dowsa) in 2016 as a means to forge deeper connections with his cultural roots: the native traditions, language and rich music of Ireland. Teaċ Daṁsa, ‘House of the Dance’ in Classical Irish, reflects Michael’s ongoing creative journey, further fusing his work to the place from which it originates. This is exemplified in its first production, Swan Lake / Loch na hEala. Swan Lake / Loch na hEala re-imagines Tchaikovsky’s masterpiece as a unique fusion of dance, traditional storytelling, folk music and theatre. It premiered at the 2016 Dublin theatre festival to universal acclaim—the Irish Times called it ‘a stunning piece of theatre, simultaneously compelling, disturbing and breathtakingly beautiful.’  Swan Lake / Loch na hEalan will tour extensively through to 2019 and continues the tradition of ground-breaking productions for which Michael is reputed. Michael rose to acclaim as the artistic director of Fabulous Beast Dance theatre (1997-2015), creating three Olivier Award-nominated productions: Giselle (2003), The Bull (2005), and The Rite of Spring (2009).  In 2004, Giselle won an Irish Times Theatre Award and The Bull received a Critic’s Circle Dance UK Award in 2008. Rian, created in 2011, won a Bessie Award (a New York Dance and Performance Award) in 2013 for ‘Best Production,’ and toured internationally for 3 years. Fabulous Beast presented a Stravinsky Double Bill in 2013, a reinvention of their 2009 production of The Rite of Spring with a new production of Petrushka. It premiered at Sadler’s Wells, London before touring to the Movimentos Festival, Germany, the Galway Arts Festival, the Brisbane Festival and the Melbourne Festival. Michael has collaborated with some of the world’s most foremost companies. In 2012 he directed and choreographed a new production of Handel’s Julius Caesar at the London Coliseum, for English National Opera.  In 2015 he created an original piece, The Big Noise, for the GoteborgOperans DansKompani working closely with celebrated Nordic Folk Musician, Ale Moller. As Guest Artistic Director of the National Youth Dance Company at Sadler’s Wells London for the 2015 – 2016 season, Michael was involved in the creation of In-Nocentes. In March 2017, he set a new work to Dvorak’s 8th Symphony for the Dance Company at the Gärtnerplatztheater, Munich. Michael is an associate artist at Sadler’s Wells London.

UCLA’s Center for the Art of Performance (CAP UCLA) is dedicated to the advancement of the contemporary performing arts in all disciplines — dance, music, spoken word and theater, as well as emerging digital, collaborative and cross-platforms — by leading artists from around the globe. Part of UCLA’s School of the Arts and Architecture, CAP UCLA curates and facilitates direct exposure to artists who are creating extraordinary works of art and fosters a vibrant learning community both on and off the UCLA campus. The organization invests in the creative process by providing artists with financial backing and time to experiment and expand their practices through strategic partnerships and collaborations. As an influential voice within the local, national and global arts communities, CAP UCLA connects this generation to the next in order to preserve a living archive of our culture. CAP UCLA is also a safe harbor where cultural expression and artistic exploration can thrive, giving audiences the opportunity to experience real life through characters and stories on stage, and giving artists an avenue to challenge assumptions and advance new ways of seeing and understanding the world we live in now. 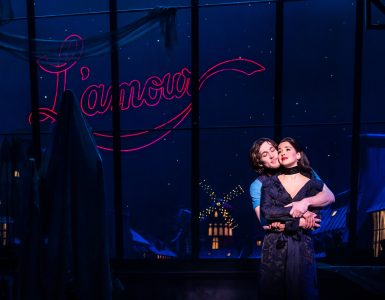 Burning up the Pantages stage – “Moulin Rouge! The Musical” reviewed 

Calling all soul sistas! Dramatic and stylish—Baz Luhrmann, Catherine Martin and Craig Pearce’s visually splendid musical movie from 2001 has been faithfully adapted for the stage, and the resulting lavish theatrical...