The third feature by filmmaker and musician Michael Cuenca, the crowdfunded indie I’ll Be Around is a knowing observation of the post-punk music scene in Hollywood. Mixing comedy, drama and music (along with a cast of more than 50 characters), the film is reminiscent of the works of Robert Altman (Nashville), Richard Linklater (Slacker) and even Gregg Araki (The Doom Generation).

With its 123-minute running time and disjointed storyline, it can become confusing to follow at times, but the solid performances keep the viewer engaged. Also, Cuenca and co-writer Dan Rojay have an excellent ear for dialogue, which gives these characters a convincing ring of authenticity. And, of course, viewers who are familiar with this particular scene will find much to savor.

There’s not really a plot to speak of in the traditional sense. I’ll Be Around is comprised of a series of vignettes that gradually coalesce as the characters intersect.

Set against the backdrop of a post-punk music festival, the film is populated by dozens of 30-something Xennials (the generation between Gen X and Millenial). They’re all involved in music in one way or another, whether they’re composers, performers or simply passionate fans.

Here, the characters are desperately in search of something, whether it’s self-awareness, musical success or even just a happy relationship. As 30-somethings, they can hear their interior clocks ticking and are driven to accomplish something before it’s too late.

Cuenca, who also appears in the film, said in an interview: “It’s about artists in general, and romantics and hopefuls having to cope with how society has altered in the modern age. You can’t dream because you’re unable to sleep anymore.”

There’s Cooper (Drew Clapp), who desperately needs to raise $15,000 to pay his producer or all of his songs will be deleted. Eve Valentine (Sarah Lawrence) is a successful but burned-out rocker who is tired of the scene and snarls at everyone at the festival — especially her manager.

And there’s Kip (Brendan Takash), a hopeless romantic who is desperately searching for the one. There’s also the would-be ladies’ man, Rex Dollar$ (Joey Halter), who is harboring a shameful secret — he can’t last more than a minute in bed.

And that only begins to scratch the surface. There are dozens of other characters with less-developed but no less intriguing storylines. For example, there’s the little boy selling THC-laced cookies to festival attendees; the high-school kids who sneak into the festival with Eve’s help; the strange guy who says he can see UFOs by looking through the lens of a super 8mm camera; and many more.

Throw in cameos by Jonah Ray (the new Mystery Science Theater 3000) and punk legend Pleasant Gehman, along with music by bands such as Echolust, Band Aparte and The Electric West, and you’ve got a whole lot going on. It’s a busy film, but Cuenca does an admirable job of keeping it all together.

The cinematography by Director of Photography Jessica Gallant looks terrific, and the editing by Cuenca is appropriately kinetic. The costumes by wardrobe stylist Leslie Gengo add greatly  to the authenticity of the piece, and the uncredited set decoration must have been a collaborative effort since there’s a lot to look at.

There are multiple locations, all with much to catch the eye, whether it’s the moon with the spaceship stuck in its eye from Melies’ A Trip to the Moon or a room decorated with posters from cheesy ’80s movies like Critters. The side streets of Hollywood, with their colorful murals and kitschy trimmings, serve as the perfect backdrop.

I’ll Be Around is available on demand from Indie Rights. 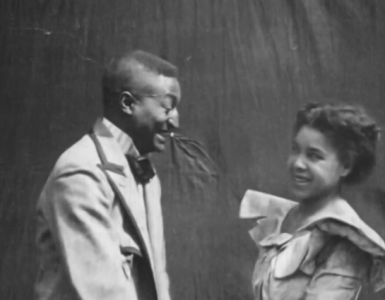 It’s a long obscured fact that African Americans have always been participating – and present – in creating cinema since its late 1800s birth. Too often marginalized and neglected, these contributions...