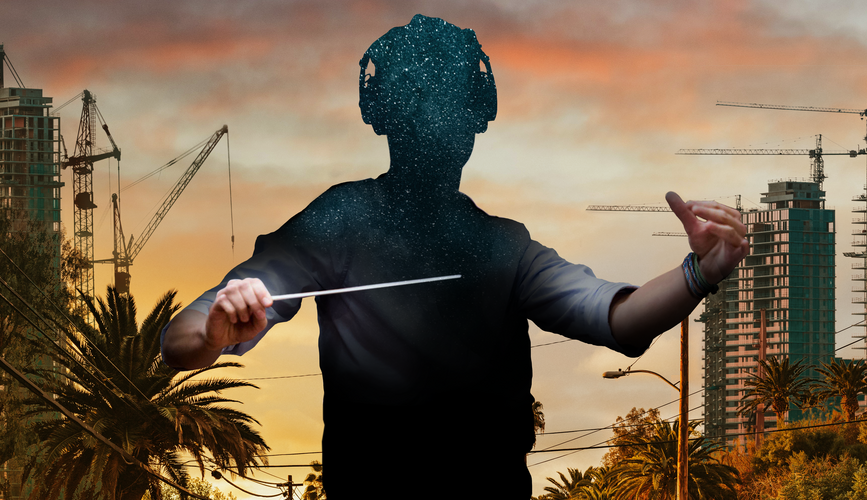 A new play commissioned and produced by CalArts Center for New Performance (CNP) has been chosen to launch its 20th anniversary season, commencing on Thursday, September 29, 2022.

You’re invited to experience the World Premiere of Scene with Cranes, written by acclaimed playwright Octavio Solis, and directed by Chi-wang Yang.

Scene with Cranes will run from September 29 through October 1, 2022 at REDCAT in Los Angeles.

Octavio Solis—known for plays of satire, mythology, and steely realism—is considered one of the most prominent Latino playwrights in America. In this production’s debut, a tight-knit East L.A. family is left shattered in the wake of their youngest son’s mysterious death. Devastated, the mother searches for the truth by retracing her son’s final steps.

In his signature blend of classic and contemporary, Octavio Solis parallels Finnish early modern composer Jean Sibelius’ musical masterwork in a play of the same name. Exquisitely visceral, Chi-wang Yang’s direction of Scene with Cranes navigates the many avenues of loss, leaving us stranded in a meditation on grief.

“We could not be more excited to produce this beautiful new work from one of our greatest living playwrights. Octavio, Chi-wang, and the creative team embody the best of what CNP promises – bold and profoundly moving artists of daring imagination. I can think of no better way to open our 20th season.”

Scene with Cranes is a project of Duende CalArts, an initiative of the CalArts Center for New Performance dedicated to developing and producing innovative work emerging from Latinx and Latin American communities and sources. Established in 2009 by Marissa Chibás, Duende CalArts brings prominent and emerging Latinx and Latin American artists from the performance community to develop adventurous projects at CNP. It aims to expand aesthetic boundaries and performance discourse, collaborating with national and international Latinx artists and advancing multilingual works.

World Premiere of Scene with Cranes

About the CalArts Center for New Performance (CNP):

For 20 years, CNP—the professional producing arm of California Institute of the Arts—has been an active incubator of new directions in the performing arts. Through ongoing residencies, development support, and presentations on the local, national, and international stage, CNP invests deeply in the creative practices of visionary national and international artists, realizing projects through a commitment to artist-led process.

This season, between September 2022 and May 2023, CNP will produce The George Project, an immersive audio experience based on When This War Is Over, You’re Going to Get It George, written by artist Emilio Cruz and directed by Juli Crockett. Artist and director Natalia Lassalle-Morillo will premiere Pasadizo en Espiral (Passage of the Spiral) a documentary film exploring celebrated Mexican theater company Lagartijas Tiradas al Sol, their ongoing relationship with artists from CalArts Center for New Performance, and children from the Mixteca Region of Mexico. Creator and performer Peter Mark will present HA-M-LET (Spring 2023), a site-specific, multi-lingual, multimedia performance sourcing material from Shakespeare’s play, pop internet culture, home videos, and 3D animation. CNP artists-in-residence include Zola Dee, Derek Jackson, and Alpert Award winner Kaneza Schaal.

Octavio Solis is a playwright and author whose works Quixote Nuevo, Mother Road, Lydia, Hole in the Sky, Alicia’s Miracle, Se Llama Cristina, John Steinbeck’s The Pastures of Heaven, Ghosts of the River, June in a Box, Lethe, Marfa Lights, Gibraltar, The Ballad of Pancho and Lucy, The 7 Visions of Encarnación, Bethlehem, Dreamlandia, El Otro, Man of the Flesh, Prospect, El Paso Blue, Santos & Santos, and La Posada Mágica have been mounted at the Hartford Stage, the Huntington Theatre, the Houston Alley Theatre, Roundhouse Theatre, PCPA Conservatory Theatre, Cara Mia Theatre, California Shakespeare Theatre, Mark Taper Forum, Yale Repertory Theatre, the Oregon Shakespeare Festival, the Denver Center for the Performing Arts, the Dallas Theater Center, the Magic Theatre, Intersection for the Arts, South Coast Repertory Theatre, the San Diego Repertory Theatre, Shadowlight Productions, the Venture Theatre in Philadelphia, Theatre @ Boston Court, the Kitchen Dog Theatre, Teatro Vista, El Teatro Campesino, the Undermain Theatre, Thick Description, Campo Santo, INTAR, and Cornerstone Theatre. His collaborative works include Cloudlands, with Music by Adam Gwon and Shiner, written with Erik Ehn. Solis has received an NEA 1995-97 Playwriting Fellowship, the Kennedy Center’s Roger L. Stevens award, the Will Glickman Playwright Award, the 1998 TCG/NEA Theatre Artists in Residence Grant, the 1998 McKnight Fellowship grant from the Playwrights Center in Minneapolis, and the National Latino Playwriting Award for 2003. He is the recipient of the 2000-2001 National Theatre Artists Residency Grant from TCG and the Pew Charitable Trust, the United States Artists Fellowship for 2011, the 2104 Pen Center USA Award for Drama, and the 2019 Guest Artist Honoree for the William Inge Center for the Arts. Solis is a Thornton Wilder Fellow for the MacDowell Colony, New Dramatists alum, a member of the Dramatists Guild, and a 2020 inductee into the Texas Institute of Letters.  His book Retablos: Stories From A Life Lived Along The Border is published by City Lights Publishing.

Chi-wang Yang is a Los Angeles-based theater director and interdisciplinary artist. Whether in the form of plays, operas, concerts, or installation, his work is physical, experimental, and collaborative. He is committed to expanding notions of identity and theatrical form and to exploring strange encounters of body, emotion, and technology.   He is a founding member and co-artistic director of video performance collective Cloud Eye Control. Chi-wang is a faculty member of the California Institute of the Arts School of Theater, where he teaches acting and serves as Associate Artistic Director of the CalArts Center for New Performance. He received his MFA in Theater Directing and Integrated Media at CalArts and his BA from Brown University.   His work has been presented internationally at theaters, museums, and festivals including REDCAT, SFMoMA, Fusebox Festival, PICA TBA, San Francisco International Film Festival, EXIT Festival (France), Santiago a Mil (Chile), Manipulate (Scotland), Havana Film Festival, and the Edinburgh Fringe. mysteriously.org

CalArts Center for New Performance is the professional producing arm of California Institute of the Arts, established to provide a unique artist- and project-driven framework for the development and realization of original theater, music, dance, media and interdisciplinary projects. Extending the progressive work carried out at CalArts into a direct dialogue with professional communities at the local, national and international levels, CNP offers an alternative model to support emerging directions in the performing arts. It also enables CalArts students to work shoulder-to-shoulder with celebrated artists and acquire a level of experience that goes beyond their curriculum.

California Institute of the Arts has set the pace for educating professional artists since 1970. Offering rigorous undergraduate and graduate degree programs through six schools—Art, Critical Studies, Dance, Film/Video, Music, and Theater—CalArts has championed creative excellence, critical reflection, and the development of new forms and expressions. As successive generations of faculty and alumni have helped shape the landscape of contemporary arts, the Institute first envisioned by Walt Disney encompasses a vibrant, eclectic community with global reach, inviting experimentation, independent inquiry, and active collaboration and exchange among artists, artistic disciplines and cultural traditions.