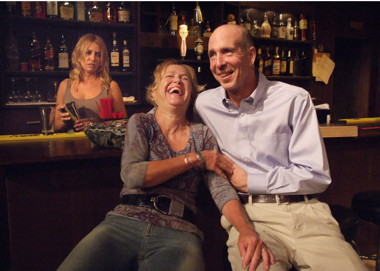 Lushes in love — Day Drinkers at the Odyssey Theatre 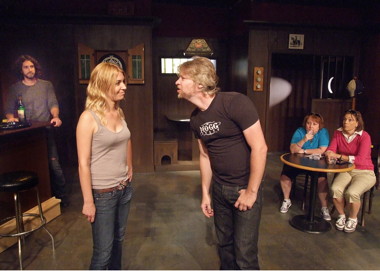 Apart from an obviously fake juke box, designer Gary Guidinger’s complicated set replicates a divey bar with astounding authenticity, from the beat-up dartboard, sticky-looking floor and shabby stools to the bar shelves so stacked you can actually smell the liquor.

Welcome to the location for Day Drinkers, a new comedy by playwright Justin Tanner about a young couple who run a grotty Downtown LA bar and their crowd of regular early morning boozers.

Awakened by a pounding at the door, a foggy, still sleepy young married couple Daniel and Jenny (Todd Lowe and Chloe Taylor), open up the dive bar that Daniel has inherited from his father to let in their early morning regular drinkers. The first pair to barrel in, bellowing for a “Scotch omelet, hold the eggs,” are a sprightly elderly couple, Mick and Val (Tom Fitzpatrick and Danielle Kennedy). These two wino lovebirds are bickering about a missing ring. Turns out they aren’t the only pair squabbling. The bar owners are also on the outs, muttering excuses about sleeping in separate beds. Their current cold war has something to do with Daniel’s brother Caleb who recently split for Canada (or did he…?) Another quarreling couple of regulars are Kate and Sharon (Melissa Denton and Maile Flanagan) who are grabbing a bit of dutch courage before they drive north to Lodi to visit Kate’s homophobic family.

When Caleb (Cody Chappel) shows up, impassioned sparks fly between him and Jenny and Daniel realizes he’s gonna have to fight to win back his girl’s love and affection. Jonathan Palmer rounds out the cast as Mick’s arrogant, vindictive son who proves a master at manipulation.

For Tanner’s past-paced and riotous one-act comedy, director Bart DeLorenzo has assembled a magnificent cast of character actors, young and old, and set them off at a cracking pace. Although all give truly brilliant performances, the detail and sincerity of Maile Flanagan’s work deserves special mention. Practically everyone appears to pound back the drinks like there’s no tomorrow. Zinging retorts and witty banter furiously volleys back and forth. There’s plenty of bullshit and the occasional insult that seems to be bandied about with great ease, not to forget the almost constant profanity; for this ‘family’ of friends, no subject or secret is off topic.

Above all, this is a beautiful and relatable play about the rocky roads of relationships. Small victories and important reconciliations plus almost non-stop laughter add up to a feel-good experience.

All production photos by Ed Krieger. 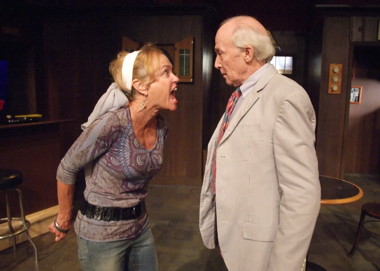 Linda Toliver and Gary Guidinger (Co-producers) have been producing the work of LA writers and actors for over two decades. During their tenure at the Zephyr Theater, which they ran until 2010, they brought in the solo work of Lynn Manning, Luis Alfaro, Michael Kearns, Amy Hill, Eric Trules, Burke Byrnes, Colin Martin, Edie McClurg, and others. They produced world premieres of Justin Tanner’s Voice Lessons, starring Laurie Metcalf, French Stewart and Maile Flanagan (also in NYC), Procreation, Space Therapy, Teen Girl and Wife Swappers. Other favorites include The Last Session and The Big Voice; God or Merman?, by Jim Brochu and Steve Schalchlin, and the outrageous seasonal treat, Bob’s Holiday Office Party. They were associate producers on Larry Biederman’s sold-out production of La Ronde at the 2009 NY International Fringe Festival and Del Shores’ Southern Baptist Sissies, The Trials and Tribulations of a Trailer Trash Housewife and Sordid Lives. They most recently produced Elliot Shoenman’s sold out hit, AfterMath, starring Annie Potts.