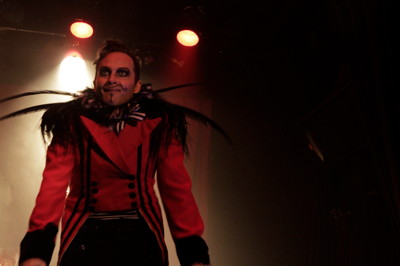 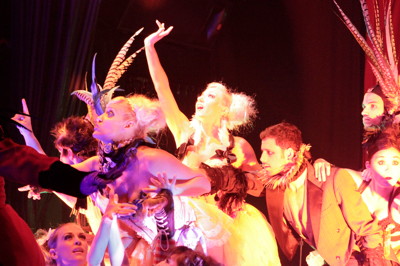 Roll up! Roll up!

The Mental Head Circus is in town, performing one Sunday per month at King King in Hollywood, as the nightclub’s monthly resident show. Upcoming show dates for the remainder of this year are listed below. Rock on over and prepare to be dazzled by astounding and gravity-defying feats of grace and athleticism.

Creator and star Terry Beeman has assembled a troupe of astonishingly talented daredevil artistes for his wacked out and intoxicatingly magical evening of cabaret and vaudeville-inspired, rockin’ music-backed circus acts. This evening of fluid yet death-defying physical performance melds avant-garde style with music, song and aerial acts.

King King has their venue set up like a dark and intimate speakeasy, with cocktail tables and cozy booths all over the place and a stage with a central jutting extension. There isn’t a bad seat in the house as the madcap ensemble of acrobats, aerialists, trapeze artists perform their breathtaking feats all over the club, dangling precariously from beams, rings and tissue trapeze slings above the stage, the bar area and almost above our heads. 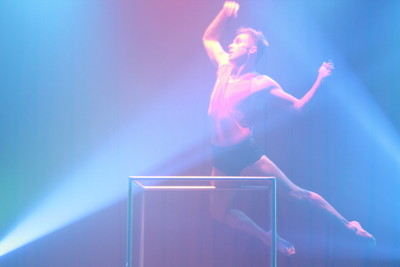 In one of several song interludes, a gorgeous song-bird gives a wonderful live rendition of Patsy Cline’s hit tune Crazy.

A curiosity piece is an act with four fluffy women wearing oversized handlebar moustaches who dance to some sax-heavy music. Adopting some neat synchronized-swimming type moves, they flash their pert behinds barely clad in fishnet stockings beneath feather and lace skirts. They’re accompanied by a guy brandishing a ‘Butt Man’ magazine, in case you didn’t get the joke. 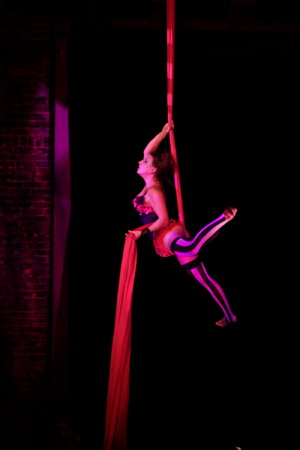 Rebecca Freund defies gravity with her daring aerial silk trapeze ‘tissue’ sling act that has to be seen to be believed.

A highlight of the night is a unique act where three female aerialists wearing sexy boy shorts and figure-hugging garb perform a dreamy synchronized act within a spinning wire cube suspended above the bar area. 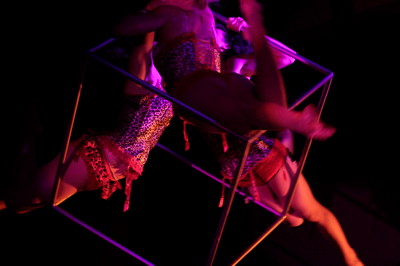 Another highlight is a balancing act center stage by two athletes in black wrestling costumes. Backed by a spare piano theme and beautifully side and back-lit, the pair perform insane feats of strength, delivering moments of pure, exquisite beauty.

Seemingly effortless gravity-defying feats or songs segue from one act to the next, each one more impressive than the last. The only thing the show might need is a storyline of some sort (or recurring characters) to anchor the acts with a narrative through-line.

But there are so many elegant, graceful and jaw-dropping ‘how do they do that?!’ moments throughout this transporting evening of visual delights.

One SUNDAY evening of every month: