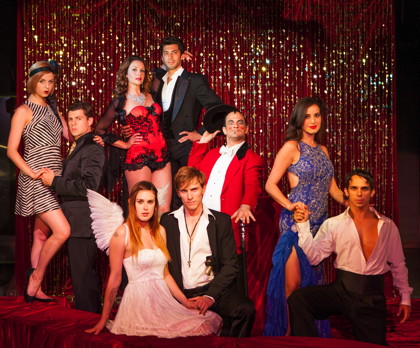 Dramatic lighting sets the mood at Rockwell Table & Stage, for the latest “For The Record” musical production (previously staged)—this time a tribute to the four feature films of creative Australian filmmaker Baz Luhrmann. The cabaret-style show smoothly segues from snippets from Romeo + Juliet to Moulin Rouge! to The Great Gatsby, with a little Strictly Ballroom occasionally thrown in there, complete with outrageous comedy Aussie accents.

The catwalks that run throughout the dining room change for each show, so that the audience is completely immersed in the action. It’s thrilling to experience these powerful voices at such close proximity.

The costumes (by Steve Mazurek) are especially luxe for this show, with fringed flapper gowns for Gatsby’s ‘Roaring 20s’ era and also lace, feathers, wire skirts, bustiers and corsets for the fin de siècle setting of Moulin Rouge!

Charissa Hogeland as Daisy (from The Great Gatsby) dazzles with a pretty and quiet version of Lana Del Rey’s forlorn tune ‘Young and Beautiful’ while the cast demonstrate their delicate voices in Des’ree’s romantic ‘Kissing You’ from Romeo + Juliet.

In the well-crafted show there’s light and shade; power and intensity are beautifully offset by quietude, thanks to director Anderson Davis.

Guests are encouraged to arrive early and enjoy Rockwell: Table & Stage’s cuisine and cocktails. There is a two-item minimum.