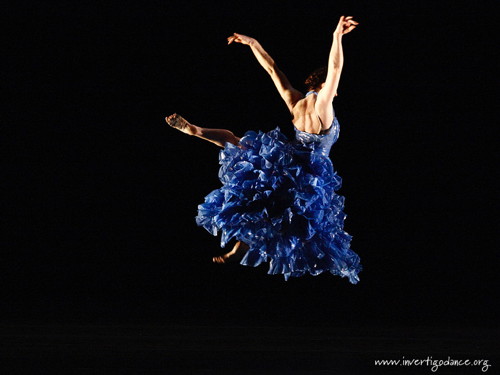 After it Happened is an intensely theatrical piece of transdisciplinary work by Invertigo Dance Theatre that creates a post-disaster world that manages to be disturbing, beautiful, and very, very funny, all at once. I guess it’s a good thing that a lot of my reviews are getting ‘I know these people!’ disclaimers, but Laura Karlin, Invertigo’s Artistic Director and the choreographer of this piece, is a friend. So take all the nice things I’m about to say about her with a grain of salt, but also, go see her show. It is exceptional.

At the opening, where Karlin gets up and gives an excited ‘turn of your cellphones’ spiel, we are inducted both into the close familiar feeling with the audience that frames the show (and, I would argue, provides a great deal of its warm aesthetic) and the world of the piece. ‘In natural disaster areas,’ Karlin warns, ‘there’s no reception…’

The lights go out and when they come back on, suddenly everyone bursts to life and we are in the midst of a tribal dance. The dancers shout, loudly calling beats as I’ve seen dancers do many times before, but in this production each shout is also a call of pain or anger. Spotlights come up on arrested images of the dancers, poised in vignettes. A tree grows. A reporter wearing a hardhat and heels royally mucks things up. There is a funny scene of mistranslation, some storytelling, a dance with a bathtub. Throughout, live music from Toby Karlin, Diana Lynn (whose soaring voice must be heard to be believed), and dancer/cellist Hyosun Choi blends beautifully with the dancers’ movements and sets the tone.

Suddenly the music stops. The scene turns dark, an attempted rape and its aftermath, bleeding slowly into a scene of disaster tourism (a highlight of the show) that manages to be at once tragic and hilarious – and spot on. “Do they have plans to tour New Orleans?” I mused.

This first act, before a brief intermission, had some great images, but felt clunky here and there when dancers had to deal with dialogue. I also thought it would have benefitted from a clearer timeline of when each moment happened in relation to the cataclysmic event that preceded the show. Some scenes seemed to take place in the moment of the disaster, while some happened years later, without the indication of a clear order of events. Crystallizing this timeline would do a lot to make the frenetic action more cohesive.

The second act is funnier, wilder, stranger, and ultimately brings the show from ‘good’ to really great. It starts with childlike play and continues the theme throughout, with highlights including a piece in which dancers use chalk to draw remembered places and geographies that no longer exist on the stage, as well as a hilarious soccer game. The lines between dancer, musician and actor are completely blurred here, and the musicians frequently descend to take part in the action onstage to great effect. There is also some very impressive stuff with ropes or cords, but I didn’t quite understand the metaphor or how this approach fit into the show. The final moments are pure choreographic beauty, played out to Nina Simone songs, and take all the pain built up in the first act and the joy built up in the second, and distill them into a bittersweet celebration that made this reviewer feel in that guttural way only dance has the power to inspire.

As a whole, I appreciated the subtly egalitarian treatment of gender in the show, as women would catch men in aerial moves and generally were endowed with a huge amount of agency and power – not as a statement, but as a natural course of things. While the dancers were hugely diverse, it was never a big deal. They really got the politics of gender and race right!

I also loved how, at the end of the show, Executive Director Tara Aesquivel ran us through the exact budget figures the show would need to break even (hint: 3x what they’d make selling out for the entire run). The trust and transparency shown in this simple act, especially after seeing such a provocative piece, brought the conversation from the art itself to the state of art and artmaking in Los Angeles today. If After it Happened is any indication, Invertigo is a force to be reckoned with in this scene.