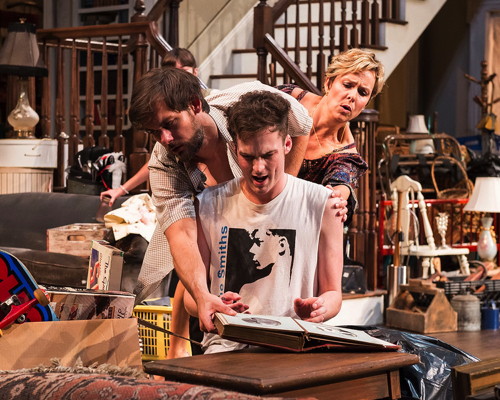 In Branden Jacobs-Jenkins’ domestic drama Appropriate, three siblings squabble over an inheritance, piling on the recriminations. It’s well-trodden terrain for many playwrights and screenwriters; smoldering dysfunction tends to explode when there’s money at stake. So, some of the bickering and accusations feel all too familiar, a key plot point’s progression all too predictable… But Jacobs-Jenkins adds a layer of tension — and something additional to fight about — when a nasty revelation about their late father’s character is unearthed as they sort through his belongings in preparation for an estate sale.

Under Eric Ting’s direction the cast give fine performances, milking the humor of the piece as much as possible. Tonally, this production seems far too focused on the comedy of the interpersonal relationships and situations and less on the pathos and gravity of the ghastly revelations.

Melora Hardin as domineering eldest sister Toni is truly awful; when one character accuses her of being a sociopath, it’s not a stretch. Robert Beitzel is good as the youngest brother Frank (aka Franz), the black sheep of the family who shows up with apologies on his agenda as well as a crunchy-granola, hippy-dippy girlfriend River (Zarah Mahler) who’s advocating for his financial interests and presumably their future.

David Bishins brings a world-wearinesss to the middle brother Bo, plagued by money issues. An emotional outpouring towards the end of the play was extremely affecting and deeply touching. He’s the only character I found I had any sympathy for.

Interestingly, it’s the ‘in-laws’ that provide a lot of the play’s spark. Zarah Mahler is excellent as River, a character that it could be easy to dismiss if she were not portrayed with such tender likability and good intentions. Missy Yager has the determination of a hunting dog in her ferocious and righteous portrayal of Rachael, Bo’s “Jew wife” (it’s a slur from the play) — she is interesting in her protective and clear-eyed standpoint as well as her unwillingness to let things slide. Oddly, she doesn’t seem to share the burden of her husband’s money woes, and it’s not made clear if he’s shielded her from much of it or if she’s instrumental to their dire financial situation.

It’s a credit to Jacobs-Jenkins’s craft that he explores many scenarios but frequently leaves them unresolved.

Appropriate touches on some deep themes, namely racism and its trickle down effect within generations, and while this could have been explored further, Jacobs-Jenkins’ three-act play is, for the most part, a deeply satisfying one. The play seems to end on a profoundly emotional moment. Unfortunately the additional, dialogue-free scenes that followed feel sensational and superfluous. Though brief, they undermine the impact of the preceding drama. Mimi Lien’s set design is given a thorough work out and it’s difficult not to fret about the running costs this unnecessary element of staging entails. Matt Tierney’s electronic sound design of stylized cicada song disappoints when the real din of these otherworldly creatures’ noise is creepy enough.