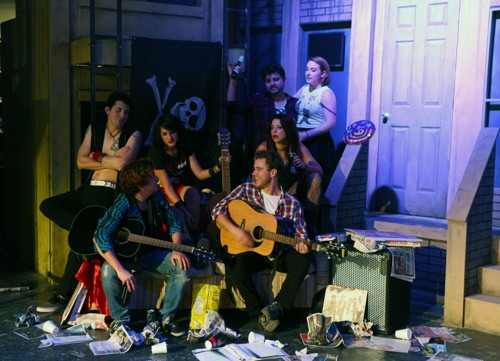 When American Idiot opened on Broadway in 2010, it brought to the venerable St. James Theatre a radical new style of musical. With very little spoken dialogue, and comprised of songs from Green Day’s Grammy-winning album of the same name (with a few tracks from its follow-up, 21st Century Breakdown, thrown in), it was a punk rock howl of rage that expressed the disillusionment of a lost generation of young Americans in a post-9/11 environment. Lauded for its explosive energy, American Idiot played for over a year and won two Tony Awards.

As the story is told almost entirely with music, it makes for an ambitious theatrical effort. The Woodlawn Theatre company, always up for a challenge, has taken on this extremely complicated piece and pretty much nails it, with a uniformly excellent cast, a terrific onstage rock band, and one of the best-looking productions I’ve seen at this venue.

The show covers several months in the lives of Johnny (Sean Hagdorn), Tunny (Matthew Lieber) and Will (Isidro Medina), best friends who decide to ditch their dead-end hometown for the excitement of the big city. However, when Will’s girlfriend Heather (Meghan McCarthy) turns up pregnant, he chooses to do the right thing and stay behind.

In the city, Johnny falls into the clutches of drug addiction, and Tunny sinks into apathy until he is motivated by television propaganda to enlist in the army and fight the enemy in Iraq.

Kurt Wehner does double duty as director and set designer, while Carla Fey Sankey handles the kinetic choreography and Benjamin Farrar manages the evocative sound design. Cameron Cornwall’s lighting design is rock-show caliber, while Rose Kennedy and Laura Briseno’s costumes are — as usual — on point. The band, under the direction of Jaime Ramirez, blazes through Green Day’s rousing score.

A solid production needs a solid troupe of performers, and here the Woodlawn also delivers. Hagdorn, Leiber and Medina do fine work as the three pals whose lives take starkly different directions. Also good are Linda Sanchez as Johnny’s love interest, Whatsername, and Crystal Vera, as the Extraordinary Girl, who literally takes flight with Tunny in an impressive reproduction of the original Broadway production’s aerial acrobatics.

Green Day’s American Idiot plays Fridays and Saturdays at 7:30 p.m. and Sundays at 3 p.m. through November 1 at the Woodlawn Theatre, 1920 Fredericksburg Road. Tickets can be obtained online or by calling (210) 267-8388.