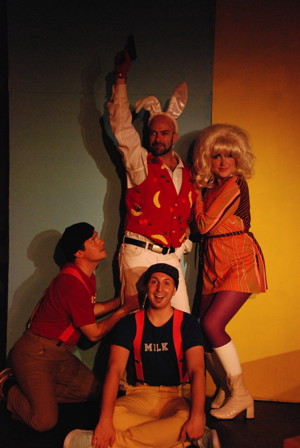 The newest offering at the quirky Eclectic Company Theatre in North Hollywood is Wombat Man: The Cereal Murders, written, directed and produced by Chrisi Talyn Saje. Her comedy parody is a fluffy stage production with the intentional nutritional value of a bowl of sugary cereal. The sets and costumes zing with bright, comic book colors and the humor is broad and punny.

In this slight story, we meet a masked hero, Wombat Man (Brian Cunningham) – a furry caped marsupial who strives to defend Slothum City from evil. Wombat Man soon faces off with the villainous Trix the Rabbit (Kerr Lordygan), a bitter character who resents the fact that he is denied the tasty cereal he promotes. The play’s premise presumably originates from the memorable ad campaign from the 1970s, where Trix (a cartoon rabbit) repeatedly tried to steal bites of the cereal before being put in his place, stymied by the advertising motto “Silly Rabbit – Trix are for kids!” In Saje’s play, Trix the Rabbit, along with his dopey henchmen Spoon (Gerard Marzilli) and Milk (Michael Davanzo), goes on a murderous rampage in order to get his paws on the fruity tasting Trix cereal. Lucky the Leprechaun, Tony the Tiger and other famous cereal mascots are all in the bunny criminal’s sights.

With its short scenes, the play moves along at a cracking pace, despite a wholly unnecessary intermission. Cunningham as Wombat Man brings a breathy enthusiasm and comedic sincerity to his performance. Lordygan is great as the evil Trix, channeling a campy concoction of Bette Davis meets Tim Curry with his haughty villainy. Anna-Laurie Rives is fantastic as the ditzy girlfriend to Trix, combining a squeaky, bubblegum-voiced gangster’s moll persona with an Ann Margaret party girl vibe, thanks to her massive blonde flip wig, darling Pucci-print Sixties mini-dresses and white go-go boots (costumes by Saje). Some of her dingbat facial expressions are priceless. Steve Jun is also great as the frequently non-plussed ‘Sidekick to be Named Later.’

There’s nothing especially sidesplitting about this play. But if you like superhero spoof comedies, then you’ll find Wombat Man: The Cereal Murders super silly and mostly amusing, with several laugh out loud moments.

Running time: 1 hour and 35 minutes, including an intermission.