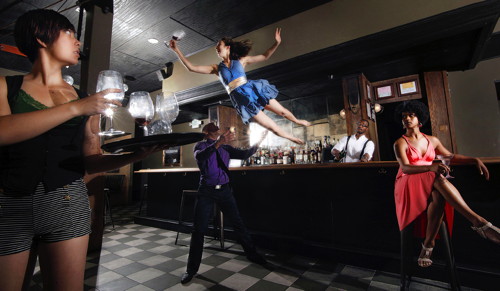 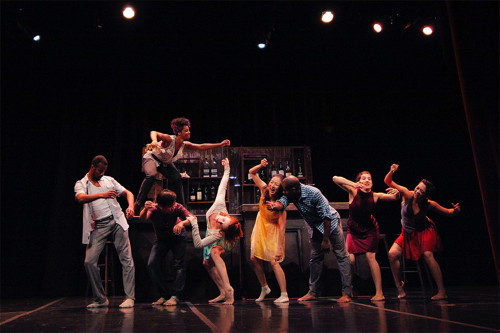 Laura Karlin, Artistic Director of Invertigo Dance Theatre, set herself a big challenge with Reeling in the wake of last year’s After it Happened (reviewed here). That piece was a response to natural catastrophe, breathtaking for its ability to draw humor and pathos from its dark subject matter. Especially relevant in a post-Hurricane Katrina world, it’s small wonder that the piece has helped propel the company to a new level in the dance world.

In contrast, while keeping the evening-length narrative dance structure that made After it Happened such a success, Reeling draws its inspiration from lighter subject matter – a drunken night on the town. The title refers to both the feeling of intoxication and the idea of fishing lines, which feature in the show alongside the world premiere of several goldfish in bowls and wineglasses who join the dancers for duets. The lighter subject gives Karlinmore room to play, including some fantastic flirtations beyond the fourth wall, but lacks some of the emotional punch of last year’s work.

Invertigo is a master of the theatrical surprise, and Reeling does not disappoint. The dancers stay one step ahead of the audience the whole time and are constantly playing with the form of the dance – from cell phone interruptions to spilled drink gags. There is a scene in the bar bathroom and lots and lots of flirting with the audience. Karaoke. There is karaoke, onstage, and it works, somehow.

From the cell phones to the reversal of gender norms in duets, the whole thing feels thoroughly 21st Century in a way that dance often fails to do. Most of the interweaving stories we get through the night are of attraction and heartbreak, but these include feminist, queer, and interracial meetings that are not frequently treated to onstage. And it feels like a treat – something actually in line with contemporary young urban experiences laid out onstage not as a gimmick but as a norm. As I stated in my last review, subtle politics are Karlin’s strong suit. She wears her heart and ethics on her sleeve.

Reeling presents a number of strong story threads – most prominently idealized attraction versus the reality of human relations – that emerge in this world but don’t carry it. I would love to have a little bit more of a narrative arc to follow through in understanding each character’s relationship to one another and the world. As it is, the work is a series of thoughtful and funny vignettes that say a lot about the human condition in new ways, but don’t transcend their vignette status.

Reeling has closed in LA for now but will be back – in the meantime, check out their tour if you are in Santa Barbara.