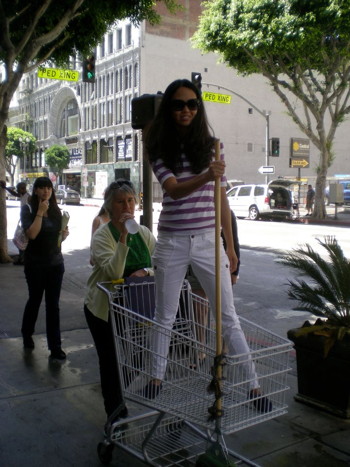 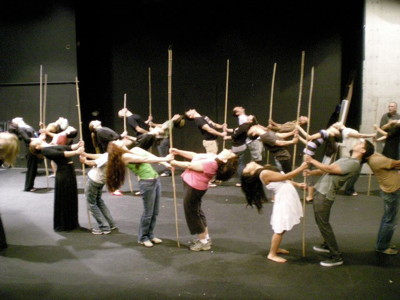 That’s the motto for Flash Theater L.A. – a new theatrical venture being produced by Playwrights’ Arena.

Artistic Director, Jon Lawrence Rivera, hopes to engage young audiences to the theater by creating performances that suit their mindset.  “The formalities of theater does not excite any young audience member whose life revolves around social networks like twitter and facebook.” says Rivera. “You may present plays with hip-hop, socially relevant topics or new music. But when you cram that idea inside an old format – an 8 o’clock performance on a Saturday night, inside a dark theater where they have to get dressed, and turn off their cell phones during the show – you lose their interest.  That’s just not the way they function these days.”

Flash Theater L.A. strives to present the antithesis of those stuffy formalities.  There are performance pieces to be performed in public places all over Los Angeles.  There are no set schedules, no set venues and at no charge.

Audiences can find out WHEN and WHERE by following them on:

You have only one chance to experience this project without having to follow them on twitter or Facebook – by joining them for the launch/preview of Flash Theater L.A. on Tuesday, September 27, 2011, starting at 8:30 PM, on Spring Street (between 5th and 6th streets) in Downtown Los Angeles.

This launch/preview is company devised and features Emmy Award-winning actors Christian Le Blanc and Michelle Stafford, both from television’s The Young and the Restless, the Gay Men’s Chorus of Los Angeles, the band Cityzen, a gospel choir, and a cast of more than 100 actors, singers, dancers and stilt walkers.

Future Flash Theater L.A. performances will be written by LA-based playwrights in celebration of Playwrights’ Arena’s 20th Anniversary Season in 2012.

For more information go to their official site

On Spring Street (between 5th and 6th streets)