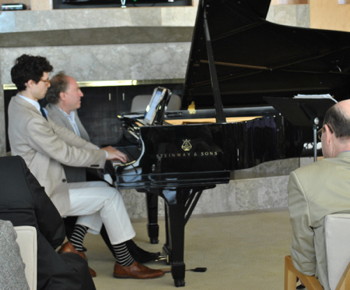 Music lovers seeking an exceptionally rare concert experience will be thrilled to learn about the opportunity to hear private musical performances in intimate and salubrious settings.

(Scroll down to the portrait of Jeffrey Kahane for booking info.)

On select evenings over the next few months the Los Angeles Chamber Orchestra (LACO) is staging a special series of private concerts as exclusive fundraising events.

The first of the LACO à la Carte evenings of exquisite music and fine foods was held last Saturday evening. The Australia à la Carte event was graciously hosted by The Honorable Chris De Cure OAM Consul General of Australia and his wife, Mrs. Cathie De Cure, at their lovely home in Brentwood.

Mid-way through the Ravel piece I was inexplicably moved to tears. It was wonderful to watch the small audience enraptured by the glorious music, some gently swaying their heads with their eyes closed, drinking in the magical experience.

Even more wonderful was the opportunity to sit so close to the musician that we could watch Mr. Kahane’s hands, playing technique and even his own rapturous expressions. Impressively, Mr. Kahane mostly played from memory, only using a score to play a couple of the pieces. 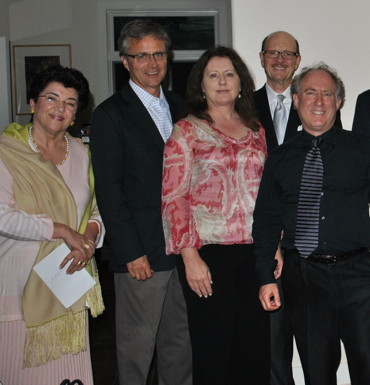 Following this breathtakingly intimate recital, we all trooped out to the garden for an Aussie-themed BBQ and exotic salads feast, catered by Elements Kitchen.

As the rest of the LACO musicians are up to Mr. Kahane’s magnificently high standards of performance, the remaining evenings promise a sublime experience for all who wish to partake.

Adding a special flourish to the season and illustrating that music truly knows no boundaries, each event features a different style of cuisine complemented by a salon performance by LACO members and guest artists. The “à la Carte” series is chaired by LACO board member Mahnaz Newman, and this season celebrates numerous musician milestone anniversaries, including Music Director Jeffrey Kahane’s 15th year with the Orchestra.

The celebration continues when LACO Composer-In-Residence Derek Bermel, clarinet, and LACO Sound Investment Composer Timothy Andres, piano, add their musical flair to this cosmopolitan evening hosted by Azerbaijan’s Consul General, the Honorable Elin Suleymanov, and Lala Abdurahimova at their residence with a striking view of the Pacific Ocean.

The cuisine of Azerbaijan reflects the country’s geographic location at the cross roads of Western Asia and Eastern Europe.

Belgium, considered the capital of chocolate, has enjoyed an unparalleled reputation for specialty beers since the Middle Ages, producing over 450 different varieties. Fittingly, Belgian beer and chocolate will add a flavorful dimension to the evening’s festivities.

In Brentwood at the Austrian Residence of Consul General of Austria

Austria, with its delightful sidewalk cafes, pastry shops, prized white wines and compelling art, music and architecture, is also celebrated as a haven for gourmands with the emergence of a sophisticated culinary movement, embracing fresh, seasonal and local produce.

Guests will enjoy a sampling of the exotic culinary riches of Iran.

Anniversary Trio, which is $550 per person for the Australia, Belgium and Iran events; and

Chef’s Table Quartet, which is $700 per person, for four events.

Since 1997, LACO has performed under the baton of acclaimed conductor and pianist Jeffrey Kahane, hailed by critics as “visionary” and “a conductor of uncommon intellect, insight and musical integrity” with “undeniable charisma.”

Under Kahane’s leadership, the Orchestra maintains its status as a preeminent interpreter of historical masterworks and a champion of contemporary composers. During its 43-year history, the Orchestra has made 30 recordings, toured Europe, South America and Japan, performed across North America, earning adulation from audiences and critics alike, and garnered five ASCAP Awards for Adventurous Programming.