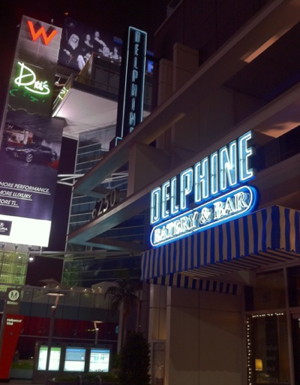 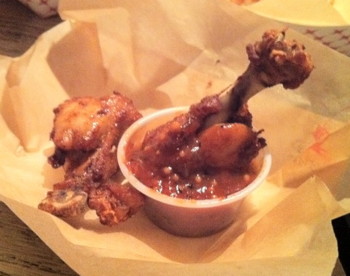 Gooey, yummy, messy – lip-smacking good. Who doesn’t love tucking into chicken wings and mini chicken drumettes all smothered in delicious sauces and washing it all back with local and imported beer or fancy cocktails?

Delphine at the W Hollywood has launched their new theme menu, Delphine’s Tuesday Wing Nite. This tasty feast officially kicked off last night and will be available weekly and is offered – yes – all night every Tuesday.  (See full menu below.)

Delphine Executive Chef Sascha Lyon (formerly of the famed Balthazar and Pastis in NYC as well as Daniel) took inspiration from one of his personal favorite ‘grub’ foods to enjoy with a beer at the bar with friends or after a hard day. 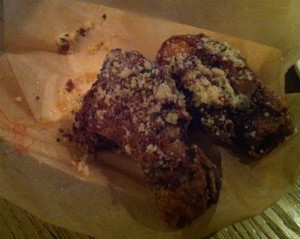 He created an assortment of wings, all served in paper baskets, priced at $4.50. Per order you get anywhere from 2-4 chicken pieces (depending on if it is a wing or a drumette). Many seem deep fried, with a thin and crispy coating of some sort. 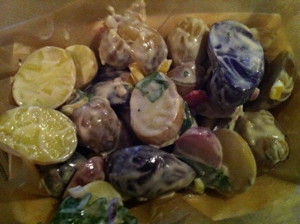 (Personally, I think the crudités should be offered free with each order of two-three baskets of wings.)

Chef Lyon is a funny fellow – cracking droll jokes and explaining his approach. It’s obvious he not only loves what he does but he just wants to make diners happy. He says he only added the Truffle Cheese option to placate truffle-crazy Angelenos. “Here, truffle is the obligatory flavor – if you don’t have truffle on a Los Angeles menu, you might get ousted. In New York we don’t use truffle oil – we use real truffles or we don’t use them at all.” 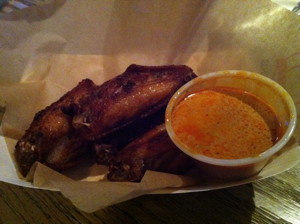 As for the food?  These chicken morsels were scrumptious and, several baskets later, we felt surprisingly replete. The Panang red curry sauce was truly excellent. The Spiced Honey sauce on crunchy deep-fried drumettes was intriguing. The Honey Sriracha was interesting and hands-down the best of the night – not too hot and pleasantly sweet. A hit brew was the Affligem Tripel beer imported from Belguim ($10.00). Local beers are $3 and $5.00. The Honey Bee and Early Tea cocktails are unusual and are way too easy to imbibe! 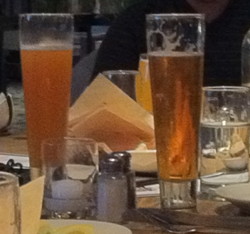 Everything was delicious but exceptionally sweet… Chef Lyon uses lots of honey, but also sugar – even in all the sides, such as the overly creamy coleslaw, in the creamy dressing on the potatoes and also in the baked beans.  Then again, this is hardly diet fare; it’s fun food for snacking on with friends.

For the Spiced Honey drumettes Chef Lyon draws on Middle Eastern and Alsatian influences, boils some honey until it is a bit caramelized and then, using fat soluble spices such as cumin, coriander, cardamom and cloves – all ground – he adds these spices as well as a little vinegar to create a pourable honey sauce. 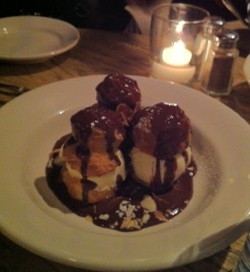 Then there are the stunning desserts…  Here’s where Chef Lyon’s classical French training and expertise is showcased. 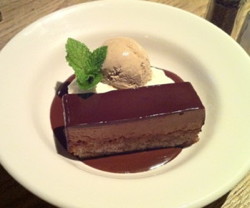 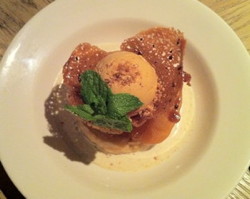 Delphine at the W Hollywood

(Hollywood & Vine Metro stop is right next door. Street parking is available or try nearby parking lots. The W Hotel also validates, but this is your most expensive option.) 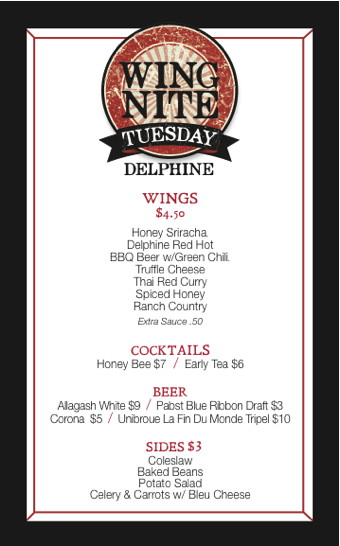