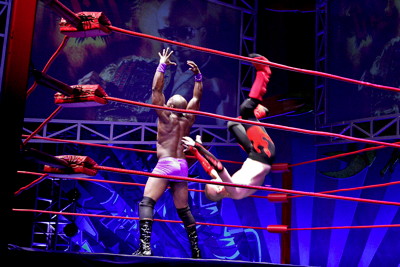 Smackdown! The Elaborate Entrance of Chad Deity at the Geffen 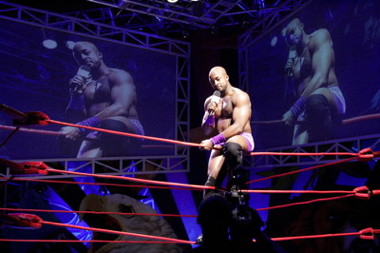 “Less yackin’, more wackin’!” That’s what fight director David Woolley sometimes says to his students when teaching them how to devise fight scenes.

This is exactly what I wanted to say throughout Kristoffer Diaz’s talky play The Elaborate Entrance of Chad Deity, directed by Edward Torres and now playing at the Geffen Playhouse until Sunday, October 9.

But then I realized, if there was more combat, then this show would be a wrestling match and not a play…

Met with pounding, raucous rap music, maniacally flashing lights and a stage dominated by a huge wrestling ring, upon entering the Geffen Playhouse you immediately know you are in for a different kind of play. Creating a hyperactive atmosphere, Diaz’s string of comedic soliloquies, peppered with almost constant profanity, drops us into the world of pro-wrestling but goes beyond the outrageous masks and pyrotechnics, revealing behind-the-scenes secrets and telling us more than we needed to know about this strange sport.

We are guided on this journey by Macedonio Guerra aka ‘Mace’ (Desmin Borges), one of the pro-wrestlers who job it is to lose to the champ every time. Or as Mace dryly puts it, “Making the other guy in the ring look better than he really is.”  All these tactics are essential for the phony shell of the wrestling show to remain uncracked and, more importantly, to ensure job longevity.

As our endearing narrator draws us into his unusual world, that of a scripted sports event, we see he is searching for something pure and warrior-like within this entertainment showcase where everything’s rigged to the dollar at the bottom line. What eventually emerges is a strong statement on capitalist America – how it works, how it is perceived and where our present day society is headed.

Diaz’s funny and often exhilarating play has energy, heart and power, blasting out the occasional shot of adrenaline, and how often does an evening of theatre really give you that?

But my issue remains – there is not nearly enough fighting!  An early flash of action briefly pumps you up and then the show becomes all wordy and talky… But perhaps it’s not about the fight; it’s about what the staged fight represents. Plus, there is a certain staccato, hip hop-inspired rhythm to the complicated speeches and dialogue that is pleasing. 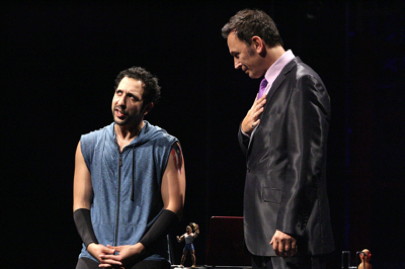 Director Edward Torres does a fantastic job with the staging, especially with the projection of pre-recorded and live video sequences (just like at a real wrestling match) playing across the various large screens above and around the stage. The cast are all fantastic, especially Steve Valentine (pictured right ^) as the smarmy, sleazy British manager clad in a shiny suit with a creepy, pencil-thin moustache. Terence Archie is good as the bling-laden champ Chad Deity, blessed with a dazzling, pumped physique – his muscles glistening with oil – and charisma to burn. A macho, posturing rock-star-type, we see him tossing banknotes around, often flanked by buxom babes and touching palms with his fans in the crowd.

Meanwhile, the second-tier wrestlers play their nonsensical parts for the show. Portraying horribly offensive and culturally inaccurate stereotypes, their ring personae are demonized as an evil Mexican bandit (Desmin Borges) or a villainous terrorist Muslim (the new kid Vigneshwar Paduar, played well by Usman Ally). Apparently the fans crave a simplistic and cathartic experience of villains vs. heroes.

Approximately 2 hours and 15 minutes with a 15 minute intermission.