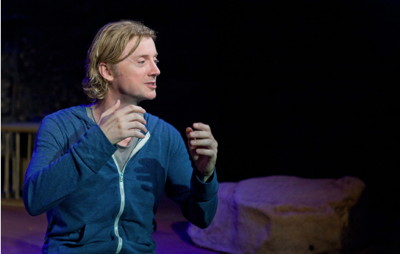 Scroll down to read my LA Weekly theatre review of Johnny O’Callaghan’s heartfelt saga about his visit to a Ugandan orphanage.

or read it here:

In this stand-up act with heart, writer-performer Johnny O’Callaghan takes us on a harrowing, emotional roller coaster as he relates the story of his efforts to adopt a 3-year-old Tutsi in fractious, civil war-torn Uganda.

Humorous (though more smiles than laughs), brutally honest and contemptuous of the blatant avarice and corruption, O’Callaghan tells his often heartbreakingly true tale with vivid intensity, describing the sights, sounds and smells of this exotic land, into which he stumbles when on a suicidal bent.

At an orphanage he likens to a “dog pound,” he bonds immediately with a little boy and then recalls a spookily prophetic dream. Convinced he is meant to be the toddler’s daddy, O’Callaghan moves heaven and earth and greases many palms to make it happen.

Although nicely directed by Tom Ormeny, the stakes aren’t as high as they should be throughout. Despite the numerous obstacles, the play moves inexorably toward a happy resolution.

In his emotional and well-calibrated performance, O’Callaghan doesn’t have to dig deep for tears to flow. He frequently breaks through the fourth wall, at times disconcertingly glaring at the audience, but elicits audience adulation by the end of his horrifying yet ultimately uplifting tale.