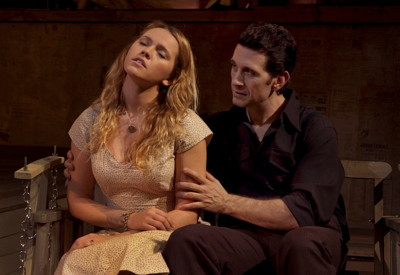 A sultry experience at The Lillian — Baby Doll

Walking into Baby Doll at the Lillian Theatre in Hollywood, that houses the excellent Elephant Theatre Company, the audience is greeted by another of Joel Daavid’s breathtaking works of art.  Once again director and designer Daavid (known for his imaginative award winning sets full of found objects and beautifully built foundations) has fashioned a completely functional and moving mise én scene that takes on a life of its own with a graceful pulse and a presence strong enough to make it the 13th cast member, lending its silent voice to the sexy solid core of the play.  And the play is both sexy and solid with its competent cast and assertive direction (again by Joel Daavid).

Set in the south (this is after all Tennesee Williams) specifically in Tiger Tail, Mississippi, Baby Doll takes place in a home occupied by child like bride ‘Baby Doll’ Meighan played by Lulu Brud and her obstinate, sweaty, scary and yet somehow sometimes vulnerable counterpart Archie Lee (Tony Gatto).  Archie feels threatened by rival cotton gin owner Silva Vacarro, (played by handsome Ronnie Marmo) and acts out in a violent manner, burning Vacarro’s gin to the ground and thus starting a blaze within his own home, losing his precious Baby Doll to the manipulative whims of a more pleasant natured Vacarro.  Incidentally, Baby Doll is based on a Williams’ short play 27 Wagons Full of Cotton, which was adapted by Elia Kazan and turned into a provocative film in 1956.

Led deliciously by the enchanting Lulu Brud, who strutted around the stage and lent herself beautifully to a seductive succession of Williams’ vixens, this leading actress often carries the play with her coquettish charms and touching performance.  Brud’s energy is infectious and efficiently lays out the sultry opening scene. She’s supported by the languishing strains of gifted musician/composer Nick Block’s original score and the mysterious grace of associate director Adam Haas Hunter’s choreography, which I would have loved to have seen more of throughout the play as its eerie elegance set a definite lilting tone to the production and disappeared all too quick after its initial introduction.  The leads are supported by a tight cast, albeit loaded with unnecessary ensemble members, though an especially touching performance from Jacque Lynn Colton playing Aunt Rose Comfort deserves mention.  The lighting is exquisite (Daavid), delightfully bathing actors in flattering washes of blues. The sound design by Matthew Richter is impeccable.  There were certain points in the play I found myself confused by the quickly unfolding plot, some of which is perhaps lost in the translation from screen to stage.

All in all Joel Daavid’s production of Baby Doll is a fine piece of theatre wrapped up in a set I’d love to inhabit myself.

The Elephant Theatre Company is a union of artists including actors, directors, designers, and writers. Our goal is to offer a satisfying theatrical experience to both new and seasoned audiences throughout greater Los Angeles by cultivating original works, encouraging risk, and bringing contemporary published works to life. The only demand this company makes of its members is that they commit themselves to the search for new avenues and unconventional ways of realizing their work.